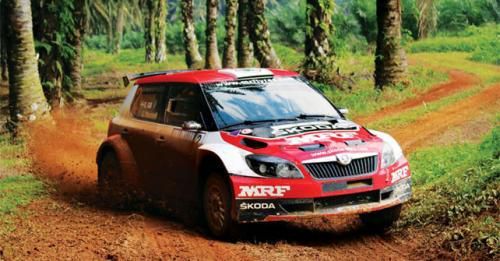 This year has been completely new territory for reigning FIA Asia Pacific Rally Championship title holder Gaurav Gill. The APRC title win made him the first Indian to win a major international rally title and his season opening win in New Zealand over new teammate – and reigning FIA European rally champion – Jan Kopecky marked the first time he started an APRC campaign with a win.

Just like his teammate last year, however, Kopecky is no pushover behind the wheel of a powerful and laser-handling rally car and the Czech took the win in the following round in New Caledonia where Gill finished second as the two were tied on 66 points apiece.

The nerves started to jangle, however, when Gill retired from the Australian round of the championship in Queensland and Kopecky took the win. Gill had been leading when a broken suspension caused a retirement.

But in the Malaysian round, it seemed as if there was some poetic justice in store for the 32-year-old Indian rally champ.

Kopecky suffered a broken suspension on Saturday while leading comfortably from Gill and the New Delhi native wasted no time in taking advantage and scoring victory.
The stats between the Indian and the Czech members of the Skoda Team MRF squad are remarkably symmetrical (for lack of a better word) and indicate that the last two rounds in Japan (September 26-28) and China (November 07-09) will be a tough scrap for the title regardless of how the final results look on paper.

After four of the six rounds the stats read; two wins each, one second place each, and one retirement each.

It would be foolish to expect either driver to be happy with status quo though.

For Kopecky it will be his first rally in Japan. He said, “There is still no pressure, It’s just good for the team at least one car has won the rally. Japan will be interesting. Hopefully we can find the same pace as we did in this rally.”

Gill was adamant that startegy will play a big role for the next race. He commented, “The strategy is going to be absolutely flat out from the word go in Japan,” said Gill. “That’s going to be sort of a decider for us. Either make it or break it.”