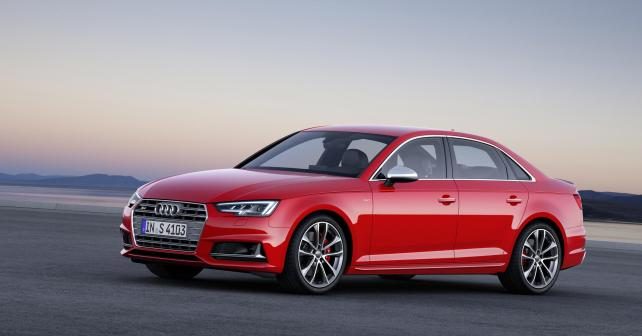 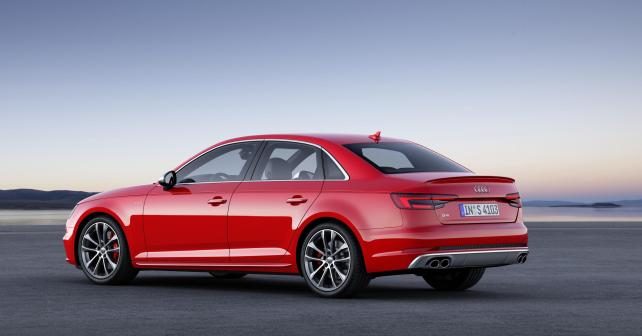 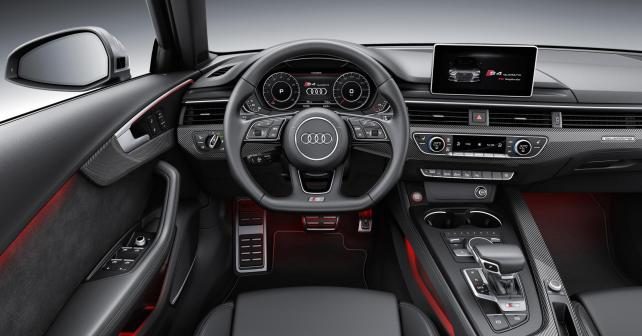 Audi has showcased the high performance S4 derivatives of its fifth generation A4 luxury sedan at the 2015 Frankfurt Motor Show. The new 2016 Audi A4 is 120 kg lighter than the previous model which is currently on sale in India and is slightly larger than the outgoing model. The new Audi A4 has already been spied testing in India and is expected to be launched here early in 2016.

At the ongoing Frankfurt Motor Show however, Audi is taking things up a notch with the showcase of the performance oriented S4 version of the sedan as well as the S4 Avant performance station wagon derivative of the car.

Powering these cars is a new 3.0 litre V6 petrol engine featuring direct fuel injection and turbo charging. The engine is tuned to deliver 349PS of max power and a substantial 500Nm of peak torque within a very usable powerband of 1,300 rpm to 4,500 rpm. The end result is 0 -100 km/h in 4.7 seconds while top speed is electronically limited to 248 km/h. The engine is mated to an eight-speed automatic gearbox while power is sent to all four wheels via the brand’s legendary Quattro permanent all-wheel drive system. The system can send up to 70 per cent of power to the front or up to 85 per cent to the rear depending on the situation.

The car comes fitted with a dynamic cornering system that brakes the inside wheels during cornering to provide more precise and predictable handling.

The suspension of the car is lowered by 23 millimeters as compared to the ride height of the standard model. There is a five-link suspension setup at the front and rear of the car. The car rides on 18 inch 245/40 section tyres as standard.

“At Audi, we have more than 20 years of expertise in developing our sporty S models,” says Professor Dr. Ulrich Hackenberg, Member of the Audi Board of Management for Technical Development. “From day one, our formula for success has been a combination of outstanding quattro performance, restrained design, and state of the art drive train, suspension, and infotainment technology. The new Audi S4 and S4 Avant impressively continue this sporty tradition.”

Audi has of course styled the car to stand out of the crowd and above the standard model with a single frame gets accentuated horizontal lines. The prominence of the bumper design is more pronounced with bigger air dams and colour contrast design elements. The car also gets silver ORVM housings, there is a new S grade bumper with honeycomb mesh housing and S-clip and quadruple exhaust pipes.

Inside, the car gets black interiors with brushed aluminum inlays, S sport seats with nappa leather and alcantara upholstery in a choice of three shades ebony, rotor grey and magma red. The seats have adjustable side sections, integrated head rests and a pneumatic massage function. The car also gets Audi’s virtual cockpit with a 12.3 inch screen in the instrument binnacle for a digital display. In sport mode, the rev counter is placed in the centre if the binnacle.

Also read: Audi E-tron Quattro will do 500kms in one charge