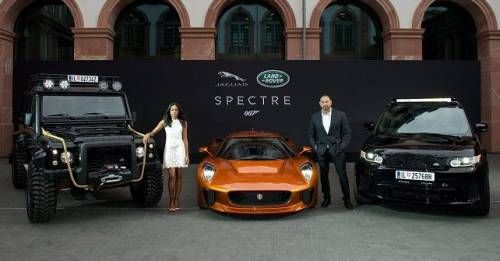 Ahead of the launch of the movie Spectre, Jaguar Land Over unveiled its cars which were specially made for the movie.

At the ongoing Frankfurt Motor Show, Jaguar Land Rover showcased its range of vehicles it made especially for the upcoming Bond movie – Spectre. The cars that were showcased were Jaguar C-X75, Range Rover Sport SVR and Land Rover Defender. One such car – the C-X75 – was created by Jaguar Land Rover’s Special Vehicle Operations (SVO) – a unit which was made in 2014 in order to meet the ever increasing demands of the Jaguar and Land Rover customers. This unit of JLR specialises in developing high performance versions of the current models and also in manufacturing limited edition collector editions.

Commenting on the occasion, John Edwards, Managing Director – Jaguar Land Rover Special Operations, said, "For Jaguar Land Rover to once again be a part of the iconic vehicle line ups in one of the most celebrated film franchises in the world represents a proud moment for us. It’s an incredible opportunity to showcase production and concept cars alike and we look forward to continuing this relationship well into the future.”