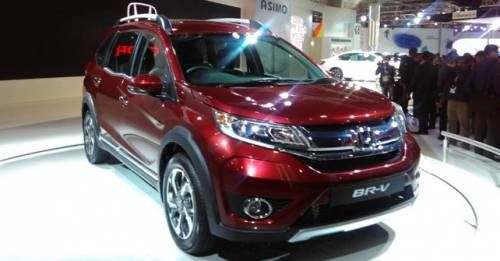 At the 2016 Auto Expo, Honda confirmed the launch of the BR-V and new Accord in India.

Honda Cars India took the 2016 Auto Expo as a medium to showcase the BR-V and new Accord in India. The Japanese automaker plans to bring both these models to our shores before the end of financial year 2016-2017.

According to Honda, the BR-V has been developed exclusively for the Asian markets, keeping in mind the needs and requirements of target customers. The BR-V boasts a spacious cabin with a 7-seat layout. On the outside, the crossover looks handsome without being overly aggressive. Powering the India-spec BR-V will the company’s current 1.5-litre diesel and petrol engines. Expect the BR-V to come with a 6-speed manual as well as an automatic transmission. Honda, however, is yet to reveal the specifications of the car, officially.

The next Honda launch in the offing will be of the 9th generation Accord sedan. One of the most successful premium sedans in the country, the Accord will be re-introduced in the market with a highly efficient powertrain (could be a hybrid) and a raft of new features and equipment, claims Honda.

Speaking at the press preview of the forthcoming Honda models, Katsushi Inoue, President and CEO, Honda Cars India, said, said, "As we celebrate 20 years of our existence in India and building an affinity with over 1 Million Indian customers, HCIL is adopting a new brand direction of "Advanced and Exciting" and our products, dealerships and communication will be guided by this new brand direction. Year 2015 has been a very successful year for HCIL as we achieved our record sales of 200,000 units in a calendar year. The launch of exciting new models Honda BR-V and Accord in 2016 will help us accelerate our growth this year and also strengthen our brand in the country."

Apart from the BR-V and Accord, Honda also showcased the Jazz Racing Concept. Nothing to cheer about just as yet since the company claims it is a study model that’s prepared by its R&D team in India. Also on display was the McLaren-Honda MP4-30 F1 car and Project 2&4 concept that is powered by the RC213V (MotoGP) motorcycle’s engine.