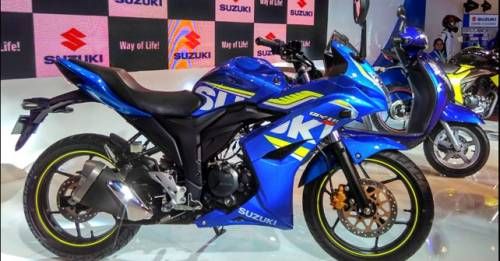 Suzuki Motorcycles India has unveiled three new products at the 2016 Delhi Auto Expo. First of the newly launched range is the all-new Access scooter, while the rest two are improved versions of the Gixxer motorcycle.

The Access 125 was launched in 2007, and Suzuki believes a makeover was long due for the scooter. The new Access gets some mild styling tweaks such as a chrome-surround over the headlamp cluster, a new digital instrument cluster, 3D emblem logo and new exterior colour options. Among other highlights, the new Access 125 has the longest under-seat storage, while there's an optional DC socket, too. Suzuki will be offering front disc brake and alloy wheels as optional extras on the new scooter.

The Gixxer range has also received some minor yet significant updates. While both the naked and faired version now come equipped with a rear disc brake setup, the fully-faired SF also gets an optional fuel-injection system. The Gixxer SF-Fi is only available in Suzuki’s MotoGP Edition livery.

The new Access will go on sale starting April 2016. Both the motorcycles are also expected to be made available in a while in the country.

Alongside the refreshed range, the motorcycle manufacturer also showcased all of its products currently sold in the country, including commuter motorcycles, scooters, sportsbikes, cruisers, quad-bikes etc. Gracing the Suzuki stall at the expo was the company’s MotoGP prototype – GSX1000RR – as well.