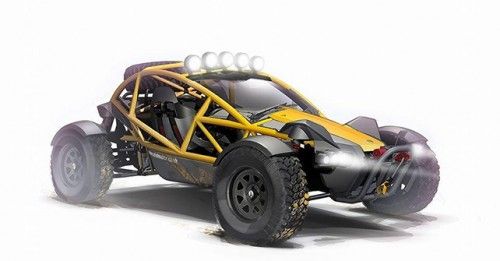 The British car company known for making the brilliant Atom extreme sports car, Ariel Motor Company has now taken the wraps off their new model named Nomad, which will most likely be unveiled to the world in January 2015.

Simon Saunders, who heads the British car maker, has described the new Nomad as being the "Atom's mucky brother", because the Ariel Nomad looks like an off-road buggy and promises to be a beast on dirt.  So far we know that the new two-wheel drive Nomad gets a significantly higher ground clearance and has big tires suitable for rough off-roading. The car will also get a long-travel suspension and a complex rollover protection with a reinforced chassis. It will also come with a mechanical limited slip differential offered as standard equipment, but more high-tech systems will be available at an additional cost.

The Nomad will be powered by a Honda-sourced four-cylinder, 2.4-liter engine, that will be tuned to deliver approximately 200bhp and is mated to a six-speed manual gearbox. The car will have a curb weight close to 700 kilograms and carry a starting price around $48,000 (Rs 29 lakhs).