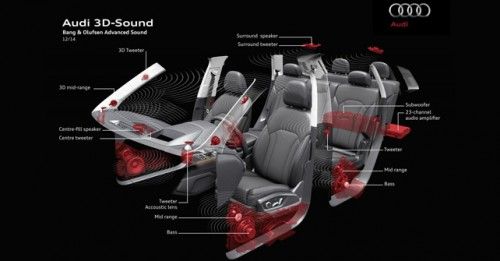 Taking in-car audio to the next level, German car makers Audi have just revealed information on their latest 3D sound system that will be make its debut in the upcoming 2015 Q7. It is available as a component of the Advanced Sound System from Bang & Olufsen and also of Bose Surround Sound. At its core is a complex algorithm that calculates the control signals for each speaker swiftly and precisely. Audi developed it for the Bang & Olufsen system in partnership with the Fraunhofer Institute for Integrated Circuits in Erlangen.

In the first stage of the process, the software in the audio system breaks the data for the music source down into its spatial components. It does this by using the spatial information contained in the data. The second stage of the process involves reassembling the sound portions so that the sound pattern inside the car corresponds to the original recording room. In the Bang & Olufsen Advanced Sound System, the digital signal processor energizes 11 channels with a total of 23 speakers in such a way that the sound is equally precise and harmonious in every seat. The Bose Surround Sound system, which generates the surround sound with 20 speakers, also features four speakers located higher up to generate the third dimension.

The addition of the third dimension makes the acoustic impression even clearer and more vivid. This rich audio experience redefines the benchmark for in-car listening pleasure.