Adaptive Headlights: The Lightbringer Of The Night 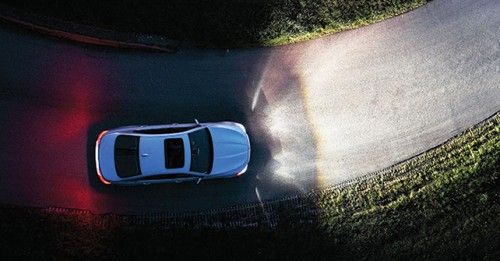 This month, we look at a technology that’s revolutionizing the way headlights light up the road ahead to make night driving a safer and more relaxing task. Needless to say, the biggest challenge of driving a vehicle at night is the limited visibility offered by the headlights fitted onto a vehicle, especially when travelling on roads that are not lit up by streetlights. Part of the problem stems from the fact that, as vehicle and road speeds have gone up, traditional lighting technology such as halogen powered headlights simply do not have enough power and range to light up the requisite distance of road ahead – especially when the vehicle is travelling at high speed. However, this problem has been largely solved with the advent of Xenon lights, which have become very popular in the past decade across vehicles of all segments. Powered by an arc that uses Xenon gas to start up, the High-Intensity Discharge (HID) lights have far greater luminosity than the traditional Halogen lights, and also have a far better range of illumination – enabling a much larger patch of road ahead to be lit, thus improving visibility at all speeds. And while modern HID’s are expensive, they also boast of a much longer life. Moreover, HIDs also have much lower power consumption than traditional bulbs, thereby improving the efficiency of vehicles by a slight percentage. But this additional visibility still doesn’t solve the problem of tackling curves at night. The problem arises when a car turns into the curve ahead and the lights remain pointed straight ahead – and so either point to outside of the intended direction of travel or straight onto the path of oncoming traffic. Now this can be a dangerous situation in both cases, as a lack of visibility at night is usually the greatest cause of accidents – especially if you compare this with increasing speeds. However, in this case, adaptive light technology is incredibly beneficial and works to improve visibility and safety both. Cars fitted with adaptive lights monitor parameters like the speed of the car, how far the driver has turned the steering wheel, and the yaw rate of the car. Based on these parameters, the sensors direct small motors built into the headlight to turn the headlight up to 15-degrees from the center towards the direction of travel. What this does is illuminate the road ahead as the car turns, since the headlights too turn with the vehicle – thereby improving visibility by allowing the driver to see the road ahead more clearly. Since cars with adaptive lights are also fitted with a self-leveling mechanism, the lights also continuously monitor the level of the vehicle and adjust the height of the lights automatically. This ensures that the super bright headlamps do not blind oncoming traffic with their glare. This works especially well in regular instances, such as when a car goes over a speed breaker and flashes the oncoming vehicle with a sharp burst of blinding light. Most cars with adaptive lights also have a mechanism where this system is not used at low speeds, as there’s no need for it. At these speeds, instead of using the main beams, the fog lamps or the static turn lights are utilized by the car’s mechanism to illuminate the area around the car, which is of immense help when parking or maneuvering the car in the dark. And while this may sound like a small leap of technology, the fact of the matter is that, once experienced, there’s no going back. Adaptive lights are a very convincing technology, as relying on them to illuminate the road ahead at all times quickly becomes second nature. This not only makes it easier to drive your vehicle at night, it also makes the act of driving at night a much safer activity. And you can’t put a price on the piece of mind gained by being safe in the knowledge that the chances of something unexpected landing up in your path ahead are much lower than on a vehicle with normal headlights.