Only the
Top 10 will
be The Best Of

Every year, we take virtually all the machines launched in the past twelve months – as many as we can get our hands on anyway – and put them through their paces at the Buddh International Circuit to choose the top-ten machines of the year, comprising five four-wheelers, three two-wheelers and two special awards for performance car and bike of the year. We evaluate machines based on parameters like quality, comfort, ride, handling, refinement, design, drivetrain, practicality, value for money, X-factor, and lap time. Our team of experienced road testers – with over 50 years of cumulative experience in testing cars and bikes – score every vehicle on these parameters before the final scores are averaged to ensure that no biases come into play. 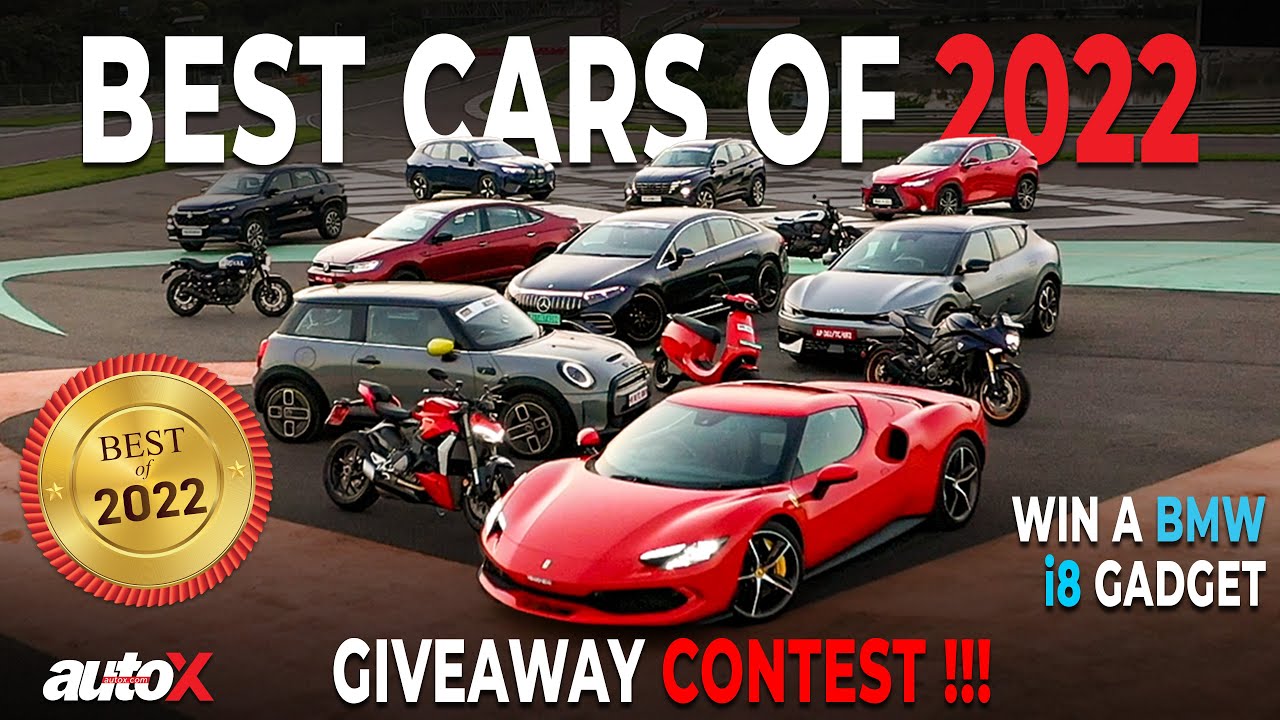 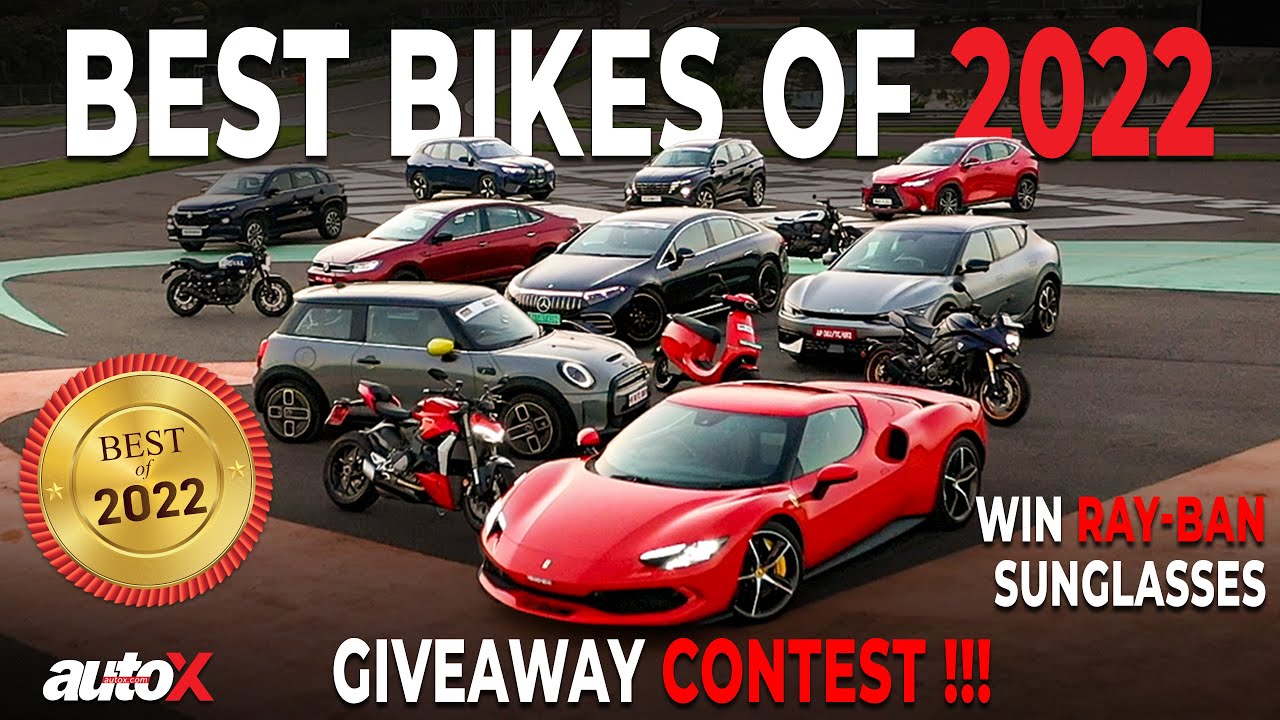 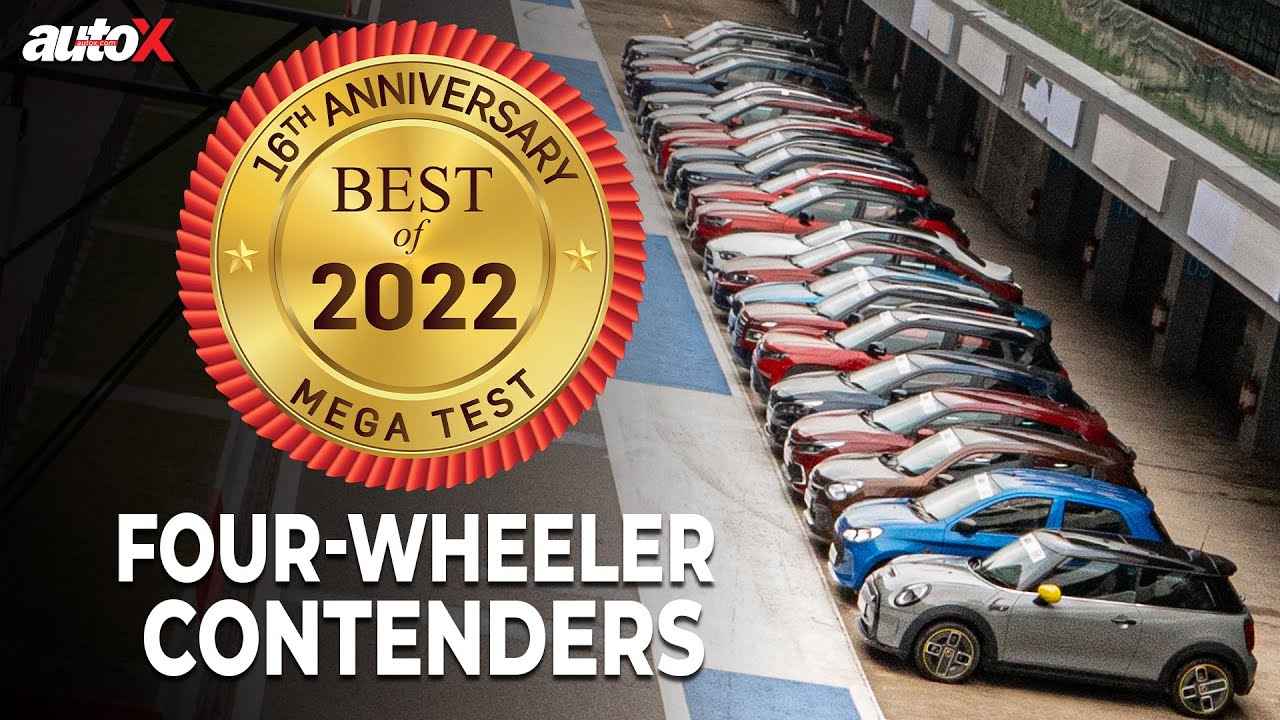 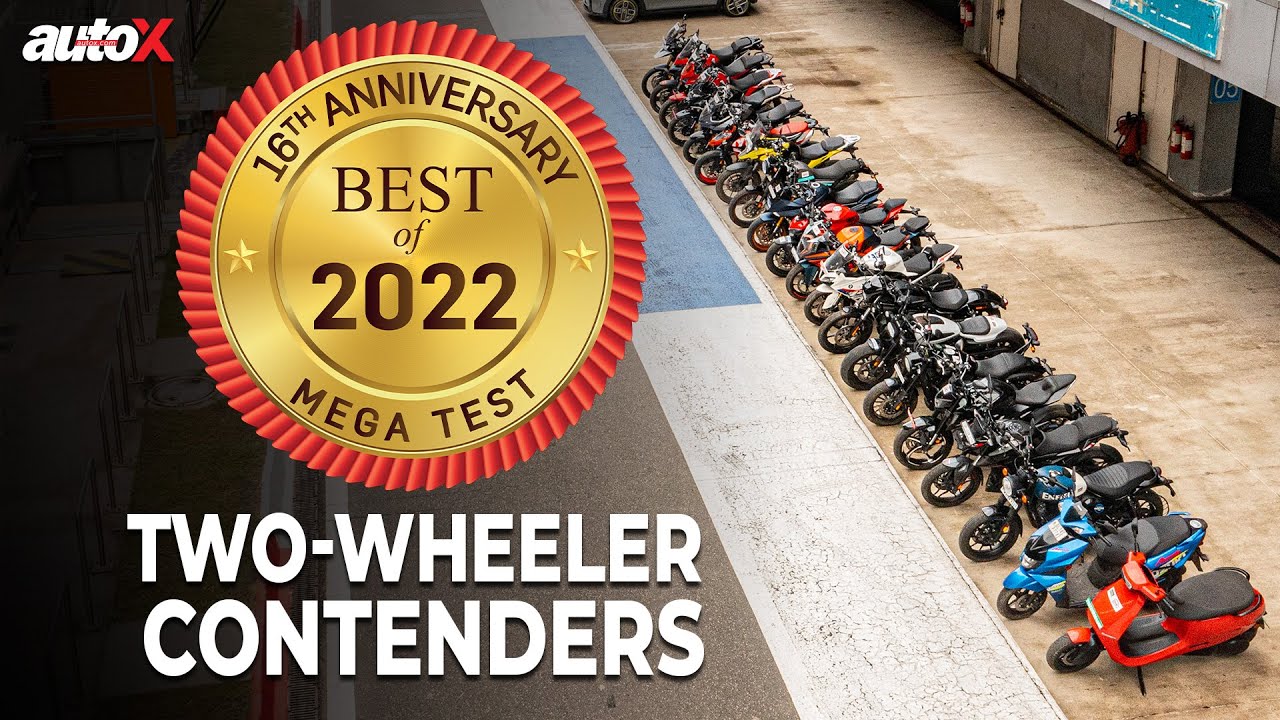 THIS MOTLEY CREW DETERMINES
THE FATE OF ALL 50 CONTENDERS

With arms folded, and leaning nonchalantly against the Ferrari, is our Editor-in-Chief and part-time racer, Dhruv Behl, who has the responsibility of setting the lap times for all the four-wheel contenders. His racing resume includes podiums in both rallying and racing – in everything from the Raid-de-Himalaya to the VW Polo Cup and the MRF Formula 1600 single-seater series. With thumbs up, and leaning against the Ducati, is bike racer Simran King, who makes sure that every ounce of performance is squeezed out of each of the two-wheel contenders in this test. Simran is a two-time JK 1,000cc motorcycle championship winner – 2015 and 2017 – and he also finished 1st runner-up in Bahrain SBK (2018-19).

Doing the hard work of crunching the numbers is our full team of experienced road testers, with over a half-century of cumulative experience evaluating cars and bikes. From left to right: Ishan Raghava, Divyank Bansal, Karan Singh, Shivank Bhatt and Dhruv Paliwal. As explained on previous pages, we score each machine on a range of parameters ranging from quality, comfort, ride and handling, refinement, design, practicality, value-for-money and, of course, X-factor and lap-time.

HOW ARE POINTS ISSUED BASED ON LAP TIMES?

Well, the fastest car or motorcycle to lap the circuit (the short-loop of the BIC) gets a full set of points. Thereafter, points are awarded on a relative scale, based on the gap to the leading machines.

The home for the autoX mega test is, of course, our spiritual home – the Buddh International Circuit (BIC).

This incredible facility is more than just a place to have fun, it is also the only place where we can justifiably push each of these 50 vehicles to their very limit. To get a uniform marker of the dynamic factors of a vehicle – power, stability, handling, and braking – each vehicle must set a lap time on the more technical 2.0-kilometre short loop at the back of the circuit. Why the short loop? Well, with 50 vehicles to cover, a full lap would just take too long. A track map points out the section of track that we utilise – the red line depicts the loop for the four-wheel vehicles, while the blue depicts the two-wheel loop, the main difference being that the bikes and scooters use the inside/bike loop of the parabolica at turns 10, 11 and 12.

Each year, in the sea of cars and bikes we receive for our mega test, there is always something interesting waiting to be discovered behind the scenes!

FROM CHINA, WITH LOVE...

After three full days of gruelling testing at the BIC by our entire team, the winners have finally been crowned. They are – in the 4W category, the BMW i4, Hyundai Tucson, Kia Carens, Volkswagen Virtus & Maruti Suzuki Grand Vitara; in the 2W category, the Suzuki Katana, Ola S1 Pro & Royal Enfield Hunter 350.


As we crowned the top-10 vehicles of the year, trophies were handed out, and some tough questions were lobbed... 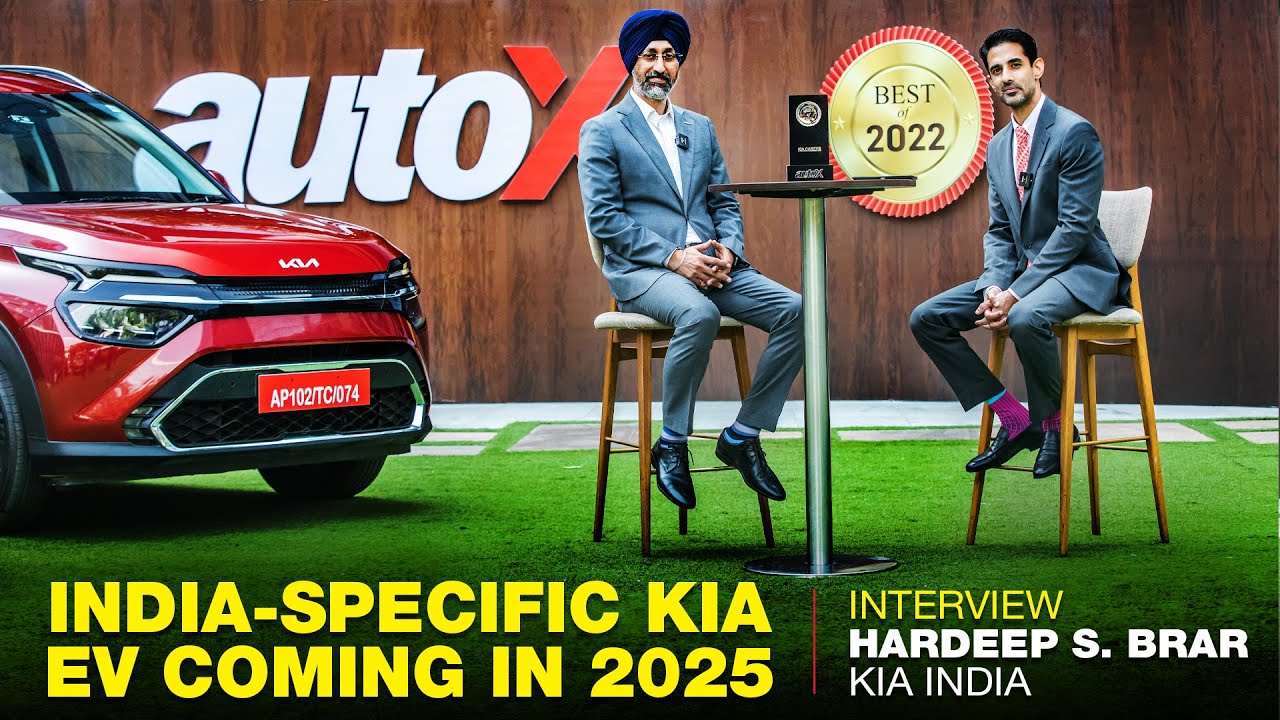 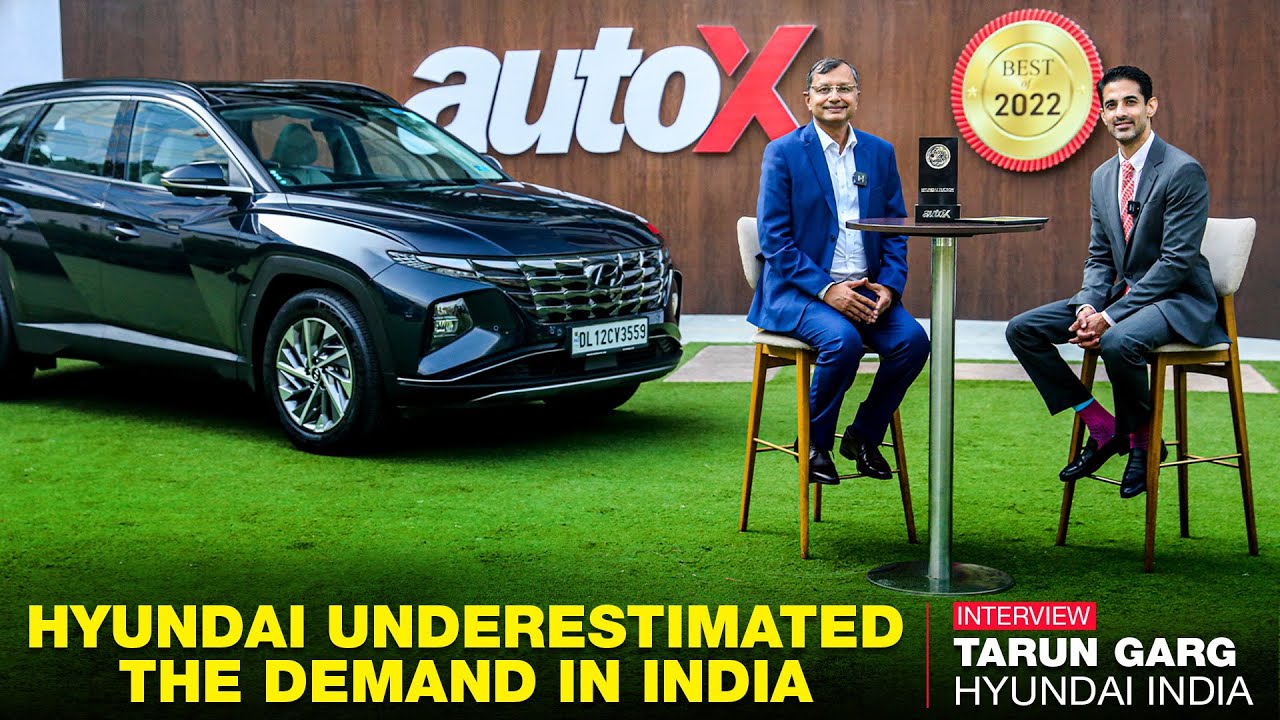 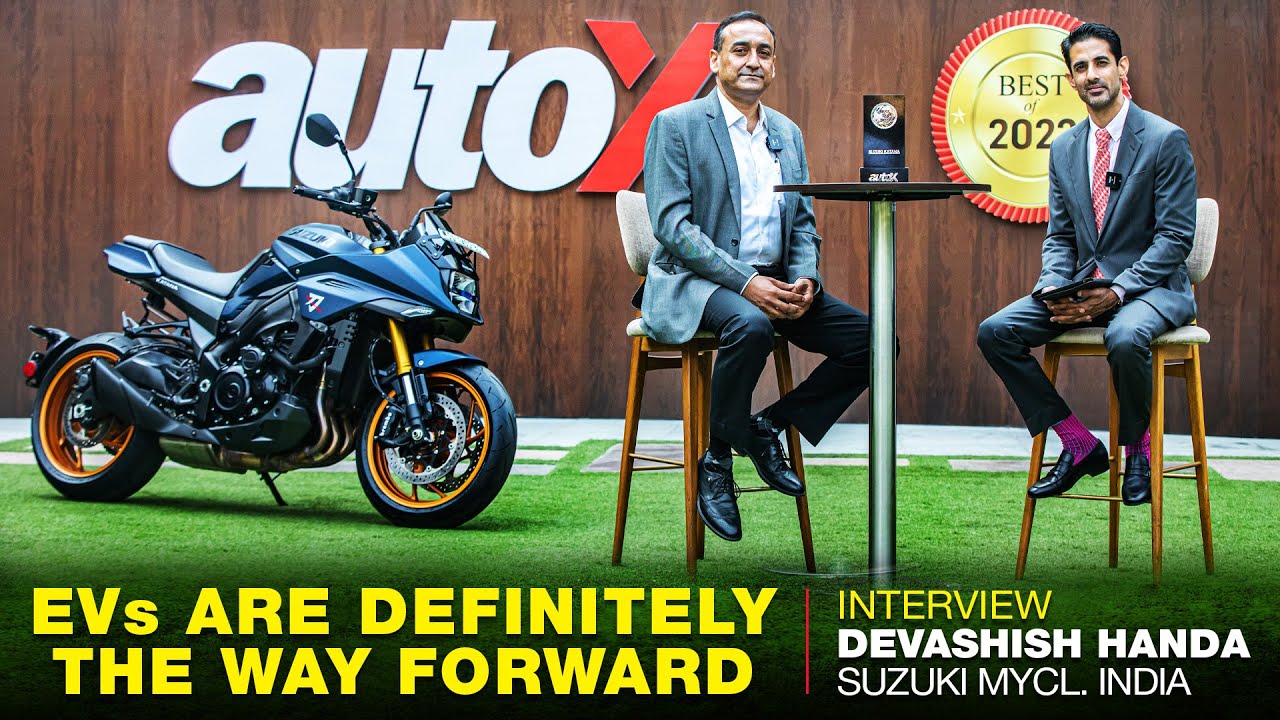 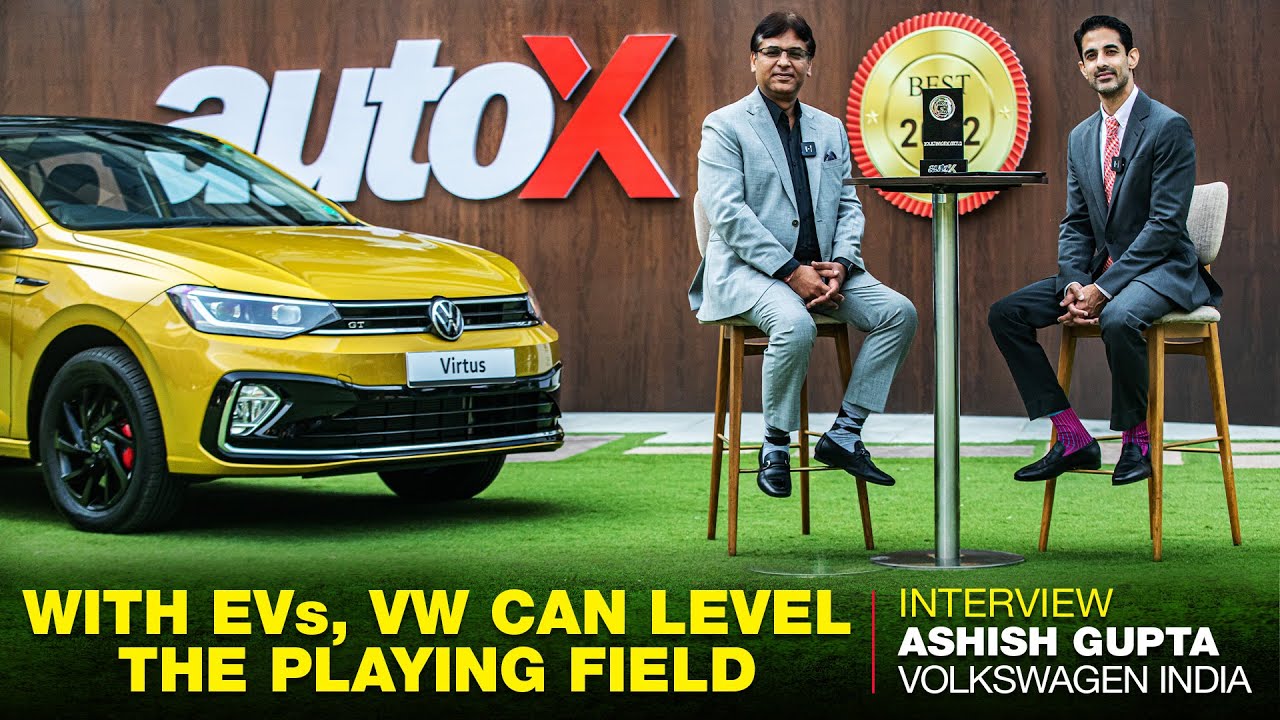 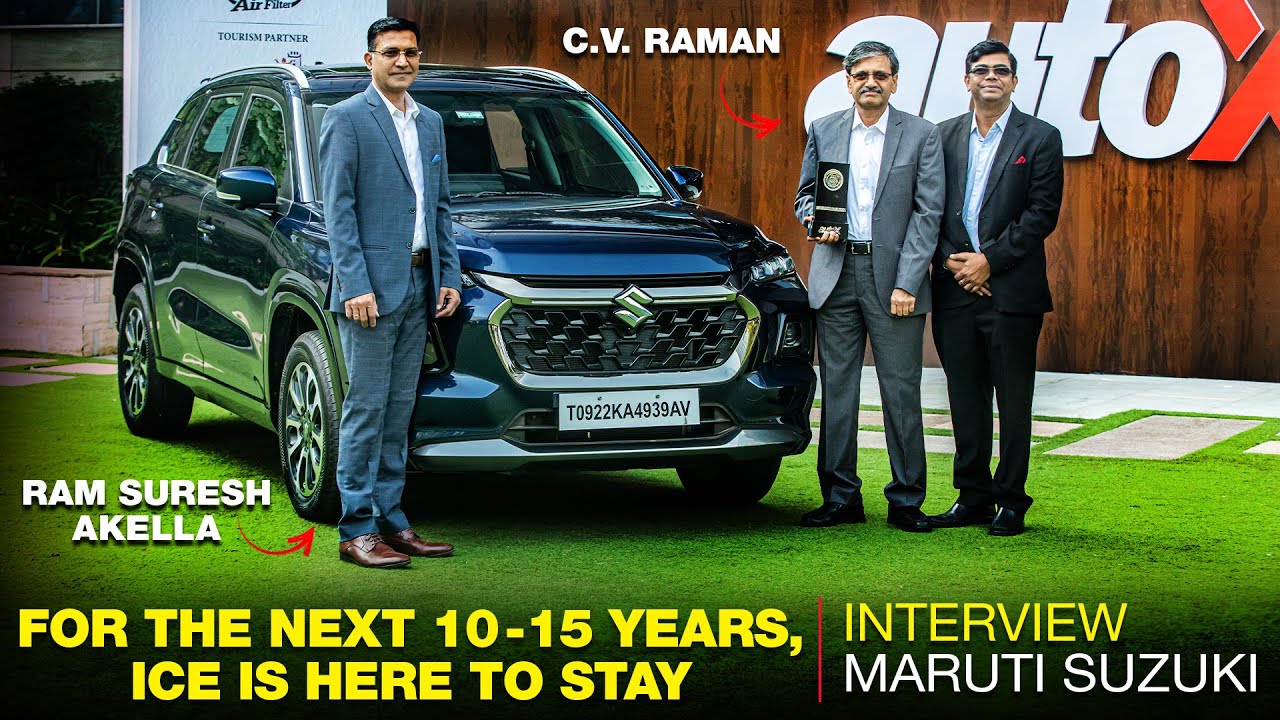 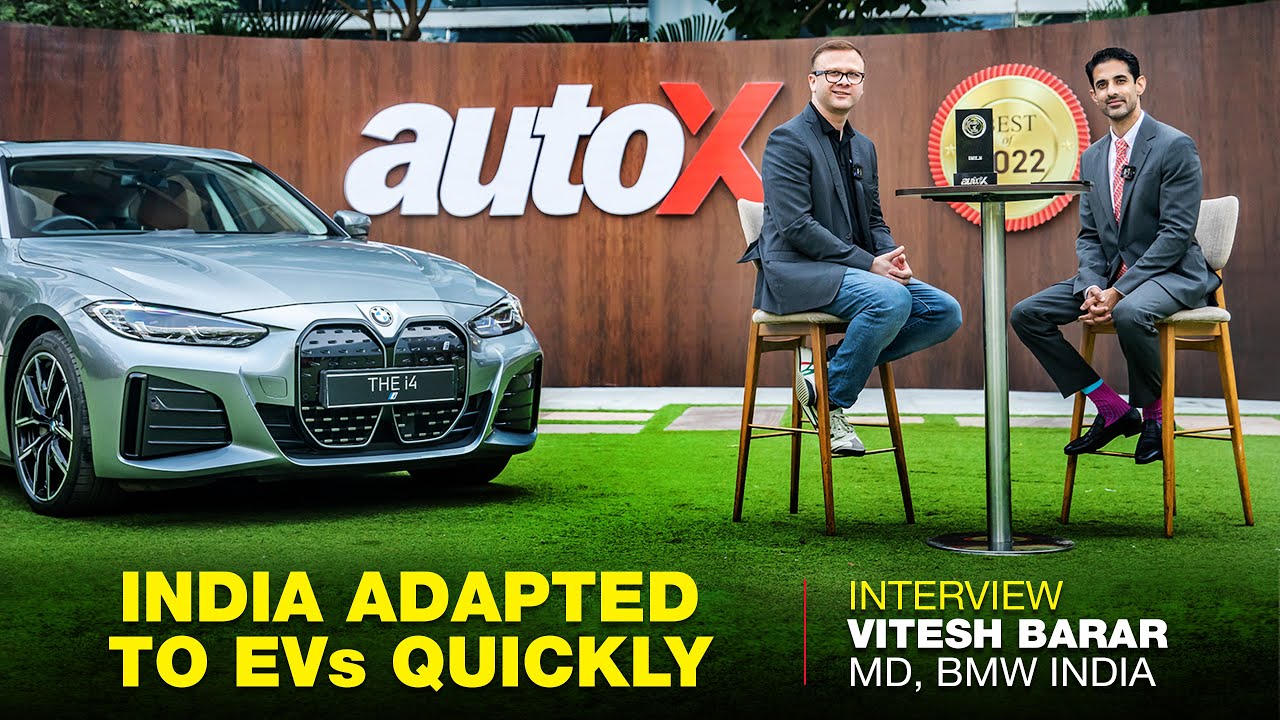 From China, With Love... 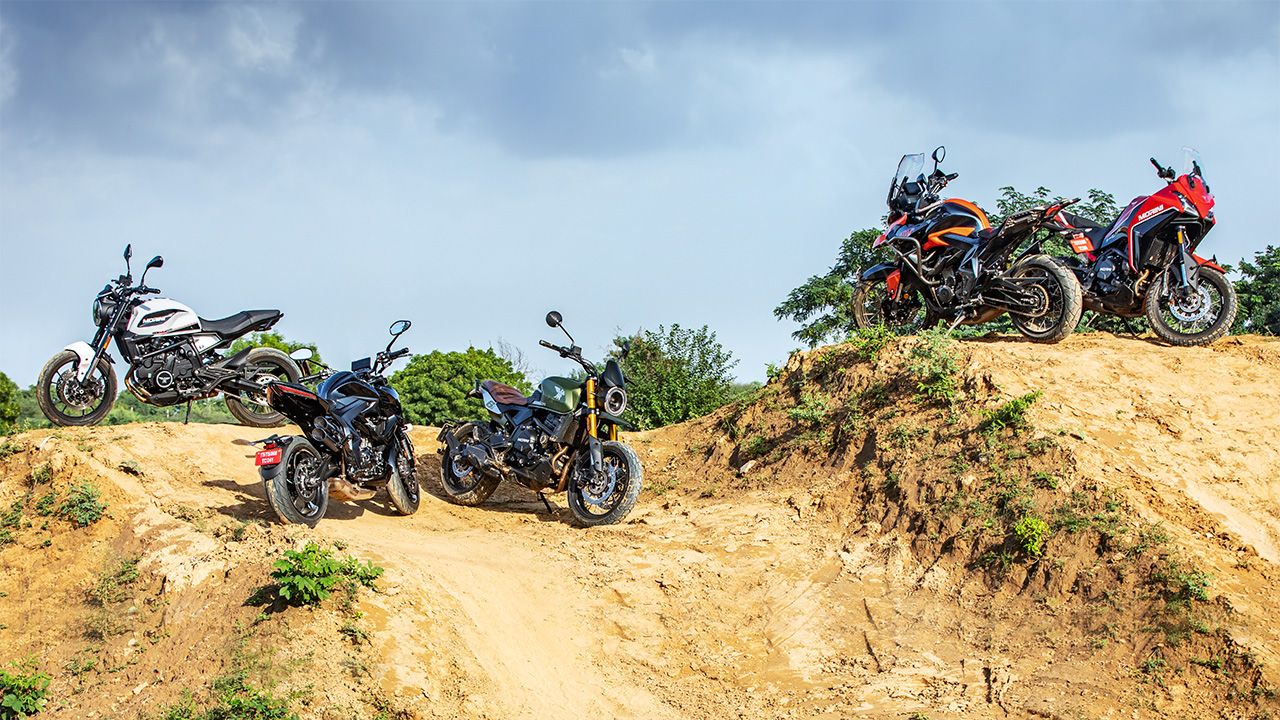 India is a very important market for any two-wheeler manufacturer, and it’s not an easy nut to crack. But we think these two brands – Moto Morini and Zontes – have got what it takes to stick around. So, here’s a history lesson.

Italian Marvel
Moto Morini was founded in Bologna, Italy, way back in 1937. It has a pretty interesting history too. At one point, Moto Morini was owned by the legendary Cagiva, later the Texas Pacific Group took control – who also owned Ducati at the time. Until fairly recently, Moto Morini was manufacturing really cool V-twin powered motorcycles, before going into liquidation. Now though, it’s owned by China’s Zhongneng Vehicle Group, with its headquarters in Milan. Moto Morini’s India range includes powerful, well-finished motorcycles that pack a lot of kit, including the X-Cape 650X featured in our track test.

Feature Packed
Zontes’ history is a little less chequered. Founded in 2003 under Guangdong Tayo Motorcycle Technology Company’s umbrella, Zontes is known for offering a lot of features on their products. The ones in India are no different, with electronic fuel filler lids, electronic windscreen adjustment, keyless operation, and more. These motorcycles aren’t super refined, or very well finished, but they are loaded to the gills with equipment. 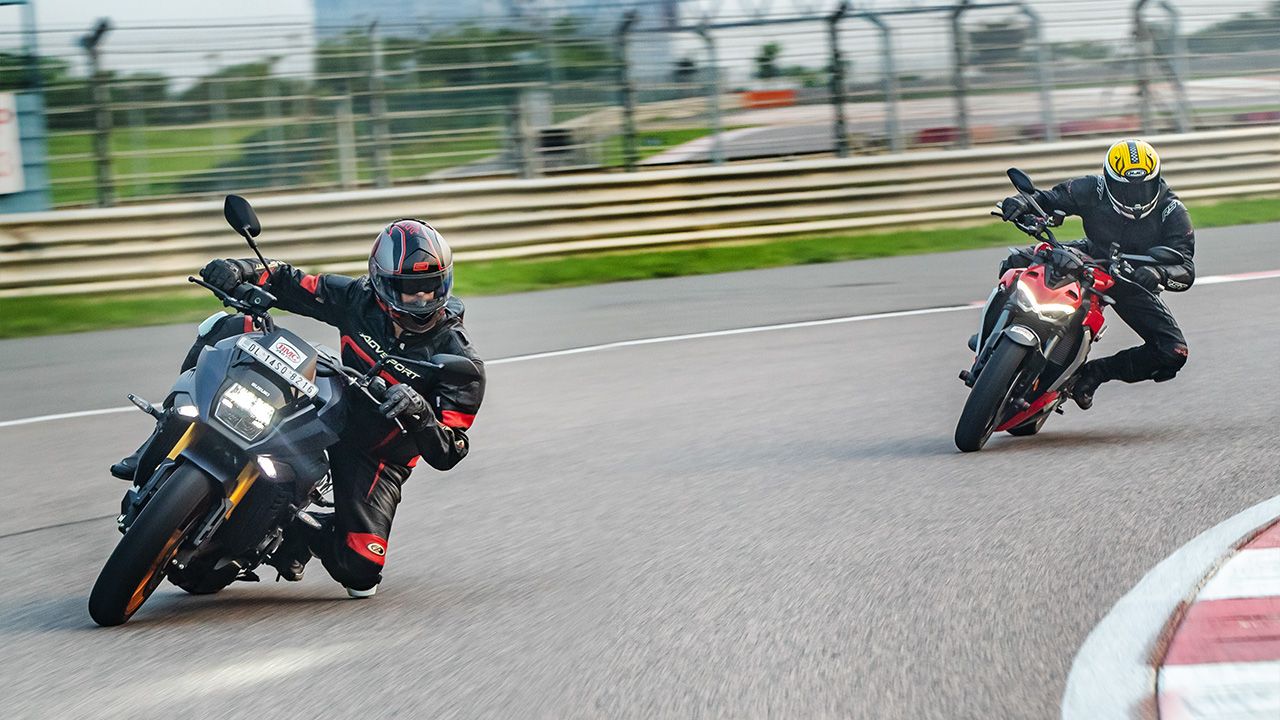 Suzuki vs. Ducati. Japan vs. Italy. Blue vs. Red. Retro vs. Contemporary. Sake vs. Wine. Inline-4 vs. V2. They may have 150bhp apiece, but these two couldn’t be more different. Horsepower count aside, there’s no common thread between the Katana and Streetfighter V2. And yet they both tug at your heartstrings in equal measure.

You see, the Katana’s appeal lies in the fact that it’s a neo-retro naked motorcycle that pays homage to the original Katana from the 1980s. And it does that so damn well, for it’s one of the most stunning-looking naked motorcycles out there. On the tech front, the Katana’s a simpler machine, too. It’s a no-frills motorcycle – a pure thoroughbred that relies on its silky-smooth superbike firepower.

On the contrary, there’s nothing sedate about the Streetfighter V2. It’s got a barking-mad V-twin motor that’s got character in spades. And even though it’s supposed to be a practical ‘street’ motorcycle, Ducati has peppered it with all the latest tech and rider aids that are available with the company’s racier Panigale range.

The Katana and Streetfighter V2, then, are two different paths that lead to the same destination. One goes about its business in an understated manner, while the other does it with sheer brutality. 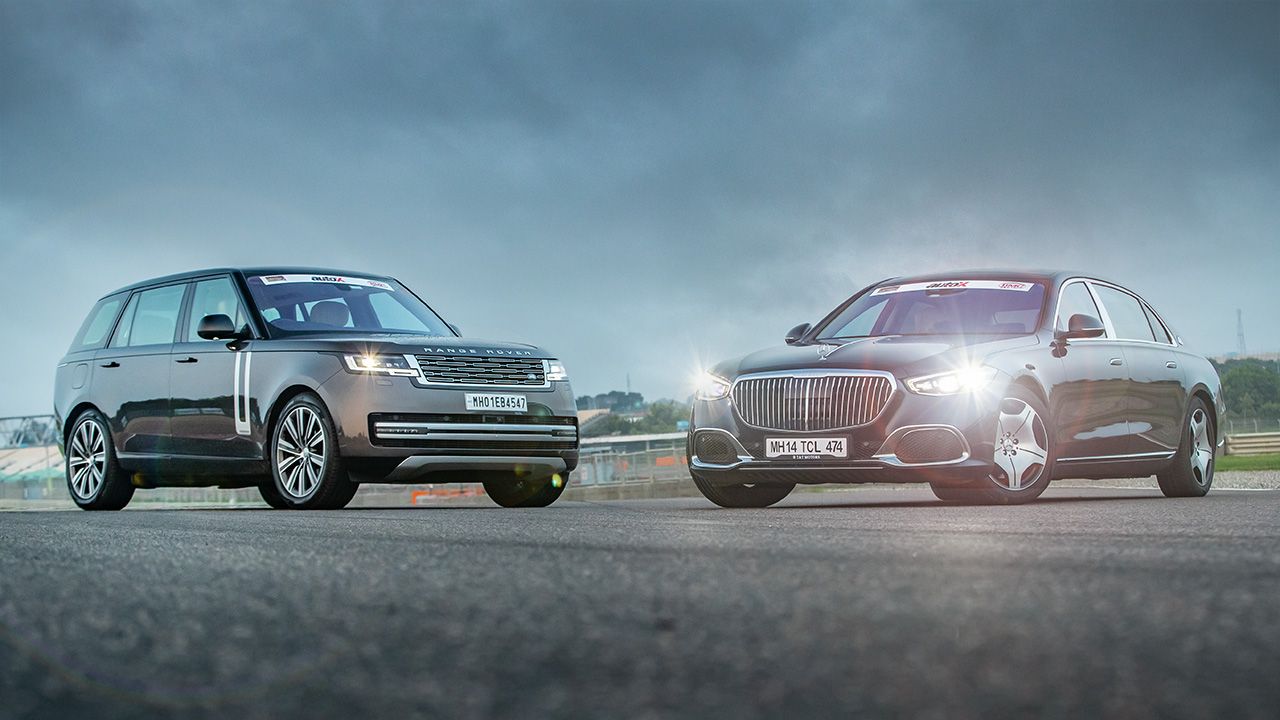 When it comes to the upper echelons of luxury, it doesn’t get much better than this duo. Both the Range Rover and Maybach are the flagship vehicles for their respective brands, and both have a long and illustrious history.
The Range Rover created the genre of the luxury SUV and was a radical idea when it was first launched over fifty years ago – in 1970. On the other hand, the Mercedes S-Class has long been regarded as one of the best luxury cars in the world and has dominated its segment right from the day Mercedes started making them. And the Maybach is at the top of that totem pole!

if you were to choose, which would it be?
Well, to be honest, the Maybach is a very, very tempting proposition. With the added space, the ultra luxurious materials, the seats, all the technology, and the Maybach customization, all of it really makes you feel like you’re inside a private jet. On top of that, the turbocharged V8 provides scathing performance. But, all the chrome means that it’s clearly the more flashy of the two, and, being a low-slung sedan, it is less practical on our broken roads.

Meanwhile, the cabin of the Range Rover, while impressive, doesn’t feel as special as the Maybach. But it’s spacious, very well finished and does provide a sense of occasion. However, what really pushes the scales in favour of the Range Rover is that it’s better looking than the Maybach – the stately design and uninterrupted heritage are advantages – and, being an uncompromising SUV, it gets extra points for its go-anywhere ability. In reality, though, if you’re fortunate enough to choose between what are two of the very best automobiles ever produced, you can’t really go wrong – now can you? 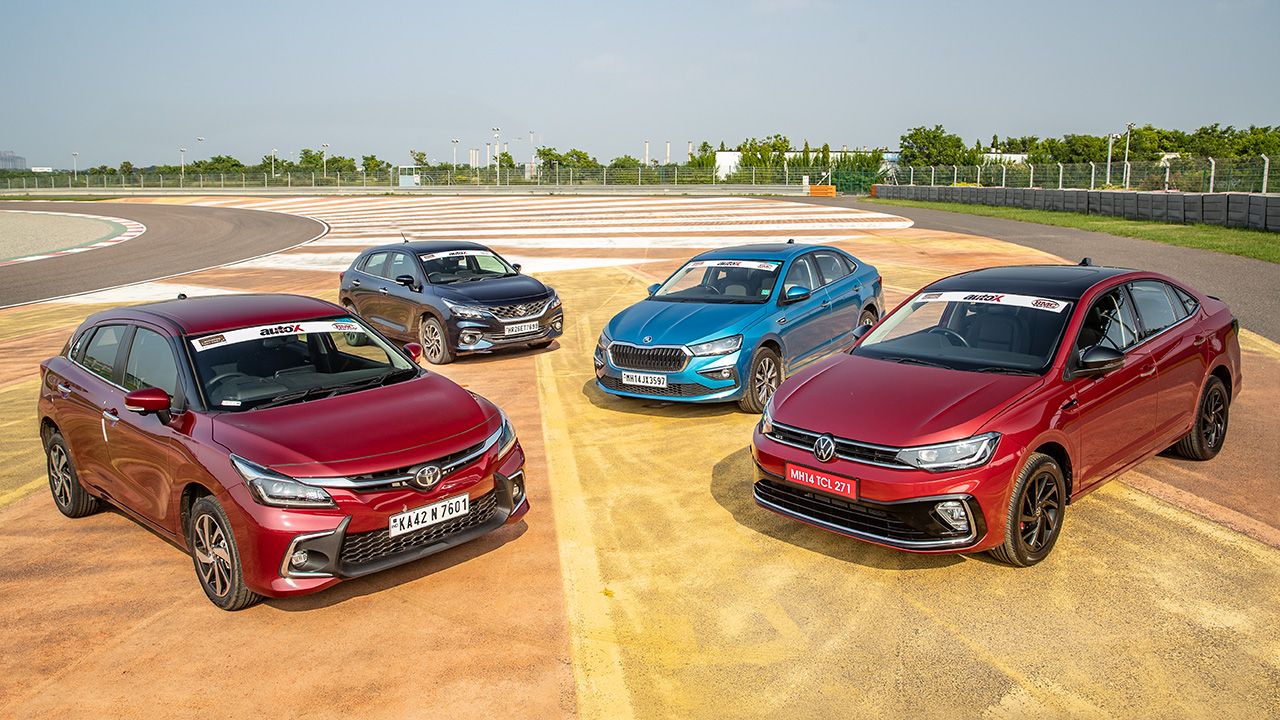 The Toyota Glanza and the Maruti Suzuki Baleno used to have differences beyond their badges, particularly in the form of their mild-hybrid tech and gearboxes, but these new-gen cars are more similar than ever before. Identical engines, identical performance, (near) identical looks, but different pricing! Yes, the Glanza costs between `10,000 – 20,000 more than the Baleno and, while you get a slightly sharper design (in our eyes) and a slightly longer warranty for that money, we can’t justify spending more for the same car!

The Skoda Slavia and Volkswagen Virtus have a similar story. While the Kushaq and Taigun differed significantly in terms of their on-track handling – the Taigun being much sharper – the India 2.0 sedans are identical. The Virtus may look racier than the slightly mature Slavia, but you wouldn’t be able to tell one apart from the other from the way they drive. And, surprise-surprise, here too there is a difference in price – the Virtus costs anywhere between `3,000 – 40,000 more than the Slavia, depending on the variant. At least Volkswagen bundles some cool cosmetic bits for the extra cash they charge for the top-spec GT trim though. 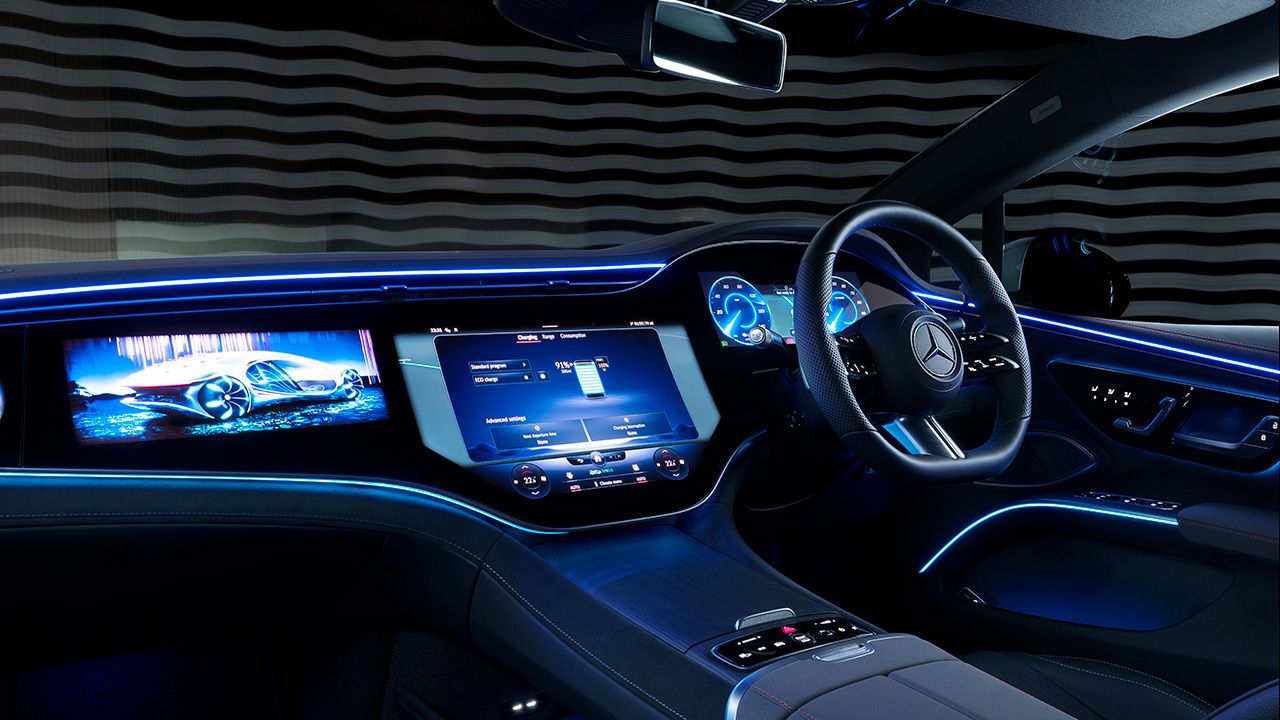 AMG Sound Experience
The EQS 53’s sound system uses special loudspeakers, shakers, and a sound generator to create a unique sound experience in two versions – ‘Authentic’ or ‘Performance.’ In addition to the driving sounds, the latter version also includes ‘event sounds’ – suitable notes for all vehicle functions that emit a sound, such as vehicle unlocking / locking, starting / stopping the drive system, or vehicle entry. The program even simulates the click of the indicators.

MBUX Hyperscreen
8 CPU cores, 24GB RAM, 46.4GB per second RAM bandwidth, and seven individual profiles! The EQS 53 AMG marks the India debut of the revolutionary MBUX Hyperscreen. Three screens sit under a glass cover and appear to merge into one, extending from A-pillar to A-pillar. As a result, what you get is the largest infotainment screen ever mounted in a series-production car, measuring 56 inches. 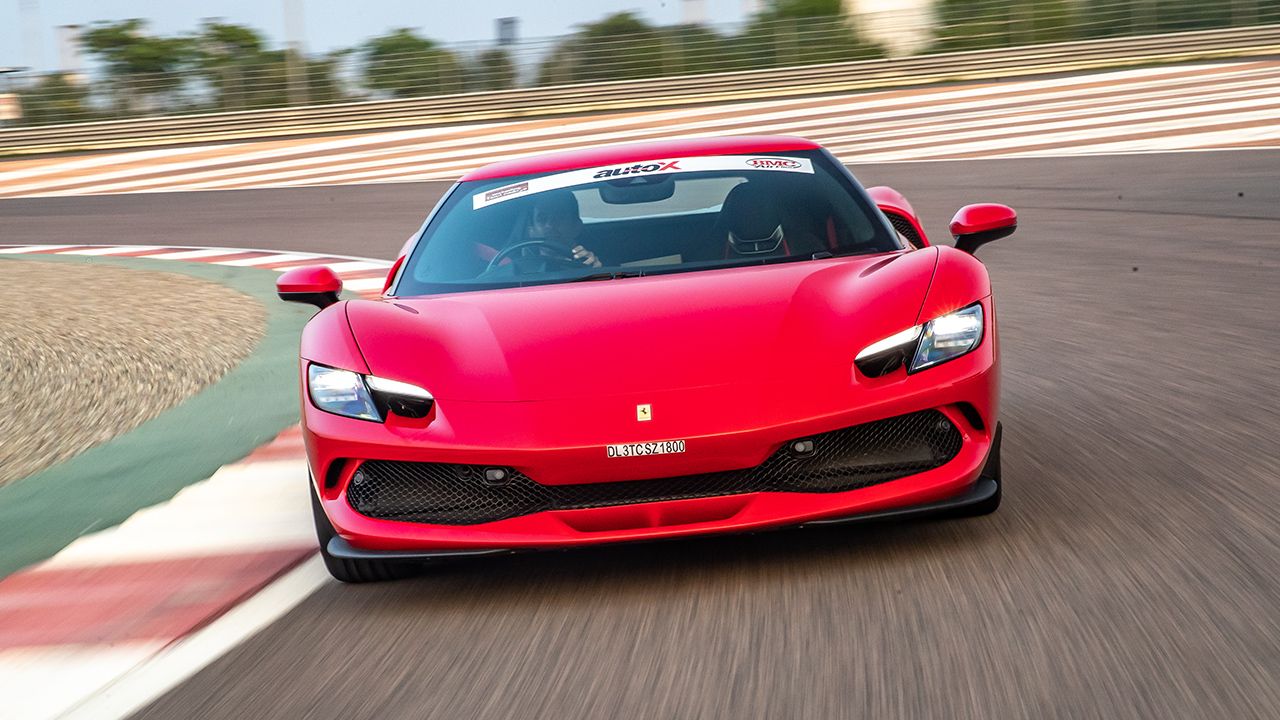 1. AERODYNAMICS
Ferrari has gone to great lengths to enhance the underbody aerodynamics, exaggerating the front downforce and ground effect to ensure that the 296 GTB remains glued to the road at speed.

3. POWER UNIT
The 296 GTB has a combined output of 818bhp from its 2.9-litre twin-turbo V6 and integrated rear-mounted electric motor, powered by a 7.45kWh high-voltage battery.

4. EXHAUST NOTE
This V6 earned itself the nickname ‘piccolo V12’ (little V12) during the development phase, thanks to its sonorous exhaust note.

5. WHEELS
Each of the five main spokes is twinned with a second, dynamic, curved element, which improves air extraction from the wheel arch.