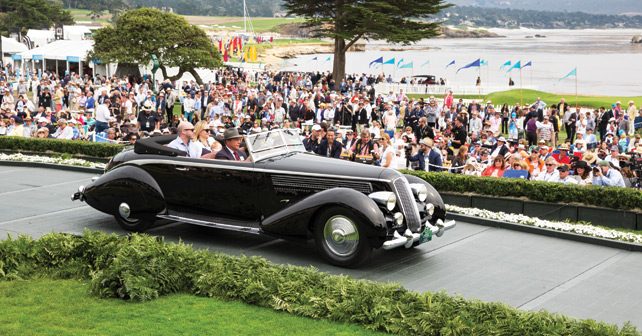 Every year, in the month of August, the most prestigious, historic and exclusive machines in the world assemble on the fairways and lawns of the Pebble Beach golf course with the glimmering Pacific in the background. And of course, as tradition dictates, the coveted best of show is chosen. While this award is the typically the preserve of very few Pebble Beach regulars, this year the ‘Best of Show’ prize went to a first-time entrant who managed to grab this most sought-after award.

This was Richard Mattei’s first ever participation in the Pebble Beach Concours d’Elegance, and he managed to lift the top prize courtesy of his 1936 Lancia Astura Pininfarina Cabriolet.

Mattei was clearly one happy man and exclaimed, “I was just happy to be an entrant at Pebble Beach, and now to get an award – and not just one, but three!” His Lancia won its class before competing for Best of Show, and was also handed the Gwenn Graham Most Elegant Convertible award.

This beautiful cabriolet was once owned by legendary guitarist Eric Clapton, who declared it to be “the most fun I’ve had off stage and out of bed.” The car was later purchased by Pininfarina for its collection, and it remained there for decades. Mattei purchased the Lancia in 2009 and spent about six years restoring it.

The Astura name was inspired by a famous castle built on Italy’s west coast, south of Rome. Before World War II, it was considered as one of Italy’s most prestigious and luxurious cars, and Benito Mussolini soon proclaimed it to be the official car for government officials. Lancia specialised in narrow-angle V engines, and the Astura featured a 2.9-litre V8 rated at 82bhp.

The Pebble Beach Concours competition drew 228 cars from 16 countries to the 18th fairway of the Pebble Beach Golf Links. It also raised over $1.75 million to help people in need. There were many strong contenders for Best of Show, including a 1938 Delahaye 165 Figoni & Falaschi Cabriolet and a 1931 Stutz DV-32 LeBaron Convertible Victoria.

Some Maharaja cars from India have been featured at Pebble Beach before, and 2018 will once again include a special class for Significant Cars of India. So start planning your visit early…