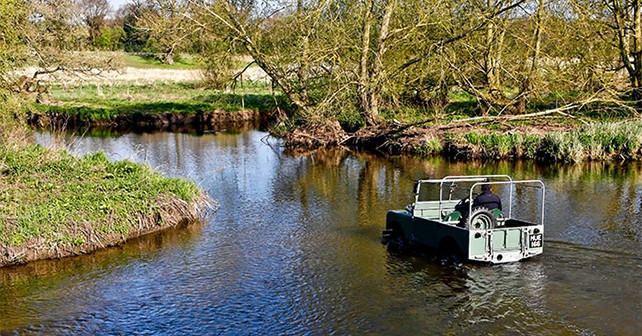 We head to the original proving grounds of many Land Rovers from years past to celebrate 65 years of the intrepid marque.

As I drove through the 300 acre Packington Estate, in the West Midlands, behind the wheel of a Series 1 Land Rover, I tried to imagine what it must feel like to be the Earl of Aylesford surveying his estate. And even though I don’t have 300 acres, dotted with lakes, to my name, I felt pretty good. My happy state could be directly attributed to the vehicle that I was driving.

Getting behind the wheel of a beautiful old machine like the Series 1 Land Rover will do that to you. It’s an all-encompassing experience that takes you back in time. With no synchros in the first two gears, it requires you to double clutch and heel-and-toe while downshifting. Actually, you do that just to immerse yourself in the experience further. The gearbox itself was so well worn that slotting the gears was actually quite easy. The steering, though, required a fair amount of muscle to navigate through the woods on the estate. And the ride was enough to dislodge a few fillings. What was surprising, though, was how spritely the old Series I actually was.

In fact, it’s not as far removed as you would think from the new Range Rovers that roll off the assembly line today at the Solihull plant, not far from Packington. You see, the Series I was also built in aluminium. After World War II, steel was at a premium, but aluminium was readily available since that’s what was being used to build the Spitfires for the RAF (Royal Air Force) at Castle Bromwich – which is where Jaguar’s are built today. And that’s not JLR’s only link to the RAF. Their current proving grounds – Gaydon – which is where we drove the Range Rover Sport, was previously an RAF Air Base.

But, back to the Series I. Believe it or not, the first design sketch was made in the sand on a beach by Maurice Wilks, who wanted a versatile vehicle that could double as a light tractor and an off-roader. It was christened the ‘Land Rover,’ and the first prototype was built using an American Willys Jeep. And just like that, a generation of great machines was born – many of which were on display to celebrate 65 years of the marque.

In fact, Packington Estate played host to 138 different Land Rovers. Among them were all the generations of Land Rovers and Range Rovers from inception to the present day, as well as specialist vehicles – such as a Land Rover on tracks, and even a fully functioning Land Rover ice cream truck – Royal vehicles, concepts, a stretched Defender, as well as a number of Camel Trophy legends. Many of these were actually available to drive around the estate, which was truly a once-in-a-lifetime experience. There was also an amphibious vehicle, in case you wished to actually cross one of the larger lakes on the estate, as well as a couple of Land Rover ploughs should you wish to try your hand at farming – Land Rover style.

Perhaps the most famous of the lot was ‘HUE 166,’ affectionately known as ‘Huey’ – the first production Land Rover. It was bought back by the factory several years ago, and now stands proud amidst the hundreds of models it’s spawned over 65 years. The most interesting vehicle I drove all day, though, had to be the prototype Range Rover, which consisted of the ladder frame and mechanicals minus the body. It was a surreal experience, as the driver is seated, literally, on a plank atop a moving chassis. All the mechanical bits of the car are exposed, and you can see the engine and suspension working in front of you, as the prop shaft goes from the transmission to the transfer gearbox and then out to the rear differential. But what was immediately evident was how much better the ride – courtesy of coil springs on the Range Rover, the first SUV to use a car-like suspension layout such as this – was over the many Land Rover’s that we had the chance to pilot over the course of the day. Naturally, this translated to a huge increase in the refinement levels of the first Range Rover, which was launched in two-door guise in 1970 – also on hand to sample around Packington.

The only car that we were allowed to take out of the estate, though, was the Land Rover Defender LXV, which stands for 65 in Roman numerals. Appropriately, only 65 of these special edition Land Rovers will be sold, and I can only hope that the lucky few who get their hands on these purposeful looking all-black Defenders use them in the manner that’s intended – which is to say, conquer all-terrain. The streets of Birmingham, the off-road trails of Packington, and even one of the lakes on the property were defiantly dispatched by the LXV. This is still an old-school SUV. Yes, there’s leather on the inside (complete with orange stitching), but nothing takes away from the fact that driving the Defender is still very much an immersive mechanical experience – one that’ll be hard to match for the next generation Defender, which is expected in a few years time. But that’s not to say that Land Rover has given up on the current platform.

Another interesting vehicle that we got to try out at the Land Rover Experience center at Solihull later in the day was the all-electric prototype Defender. And when I say try out, I mean that we got the opportunity to take it properly off-road, as well as through some streams with worryingly high water levels. And I’m happy to report that the Defender EV works perfectly thanks to an instant supply of torque. The only trouble was the high-pitched transmission whine, which is something that the engineers are still working on. What I didn’t get to drive, however, was the Bowler Wild Cat – a purpose built off-road competition vehicle that I dream of fielding in the Raid-de-Himalaya one day.

As we reported a few months ago when we looked at the near-term future of Land Rover, some projections give the SUV and crossover sector a market size of 20 million vehicles by 2020. So, it’s no surprise that Land Rover is working frantically to expand its manufacturing plant in Solihull. It’s safe to say, then, that we’ll see a lot more from the brand over the next 65 years.

But we couldn’t leave without sampling some cake in the shape of a Land Rover, which was delivered to Packington Estate in a Lynx helicopter by a member of the ‘Black Cats’ Royal Navy display team! Who says you can’t have your cake and eat it too?