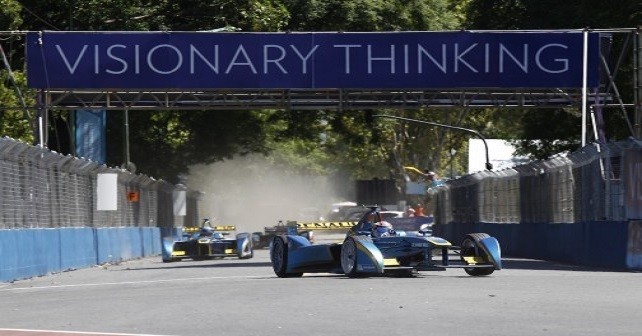 The French driver lapped the street circuit in 1:09:134 during the first part of qualifying to take provisional pole - a position he retained after the remaining 15 cars ventured out on track and set their lap times.

“I’m really happy, but this is just the start, now I need to finish here,’ an elated Buemi reflected after qualifying. “It was hard to say how the track would respond, we’ve seen previously it has got quicker as it rubbers in but you never know. In that session the battery temperature wasn’t an issue but it could be in the race. Strategy for each driver will be key.”

Lucas Di Grassi, Jean Eric Vergne, and Nicolas Prost qualified in fifth, sixth and seventh places respectively and were all left disappointed due to varied reasons. Championship leader Di Grassi crashed his car after setting what was then the fourth fastest laptime while Vergne was unable to replicate his Uruguay’s breakthrough performance in qualifying, after locking up twice on his final run. Prost, meanwhile, just didn’t seem to have the pace of his pole sitter teammate, despite having edged him in qualifying in earlier rounds.

Antonio Felix da Costa was eighth quickest while Nelson Piquet Jr finished a tenth adrift of the Portuguese in ninth.

Mahindra’s Karun Chandhok rounded off the top 10 with a lap time of 1:09:875. The Indian driver finished fifth in practice earlier today but fell down the order in qualifying, as other drivers picked up pace. His Mahindra teammate Bruno Senna qualified down in 19th after brushing the wall at the exit of turn 4.

He wasn’t the only one in the Formula E field to have a close encounter with the walls of this tight street circuit. Di Grassi and Trulli’s crashes were far worse and responsible for two separate red flags.