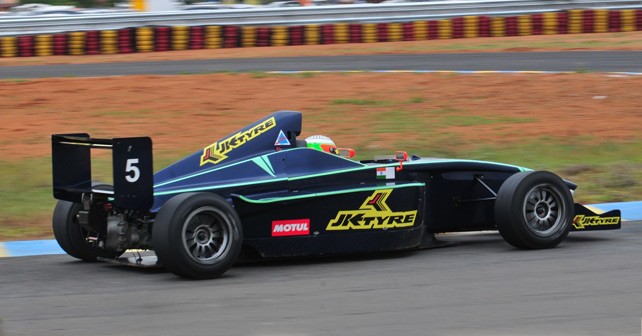 The next round of the JK Tyre Racing Championship is expected to take place on the weekend of 3 to 5 October at the Buddh International Circuit in Greater Noida.

Just like yesterday Armaan Ebrahim and Aditya Patel started from the tail of the starting grid to charge through and give their lesser experienced peers a stiffer test than normal.

Their charge in the first race of the day was halted by rain that got heavier after starting out as a drizzle to the point that the red flag was pulled out one lap to the end.

The cars finished the final lap behind the safety car as Vishnu Prasad took the win ahead of Ebrahim and Patel although in the official classification second place was taken by Nayan Chatterjee.

Chittesh Mandody, Akhil Rabindra and Krishnaraj Mahadhik took the first three finishing positions in the second FB02 race of the day although it was Patel and Ebrahim who were second and third on the road in a chaotic race. Aside from Tejas Ram's scary looking late race crash, cars spun on the boundaries of the tight and twisty circuit and a bit of wheel rubbing between Ebrahim and Ananth Shanmugam.

The second and final race of the weekend in the Volkswagen Polo R Cup was claimed by Bonnie Thomas ahead of Karaminder Pal Singh and Yatin Magu but the race featured a fair amount of carnage with drivers not assessing the grip level at the first corner after the rainshower that had caused a red flag in the FB02 race died down.

Along with drivers going off, yesterday's winner Karthik Tharani was 't-boned' by Raaj Sivram and shoved off into the run off area on the outside of C1 causing Tharani to park his car at the side of the track.

Defending champion of the Toyota Etios Motor Racing Series Diljith won the final race of the LGB F4 ahead of Sarosh Hataria and Prasad to wrap things up in the series that is billed as the first step up from karting in the country.