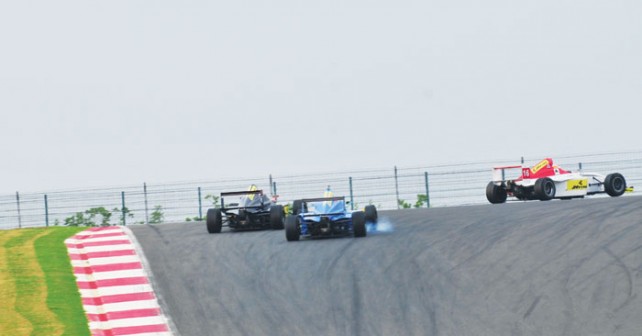 The stunning crowd turnout at the third round of the JK Tyre Championship showed the scope of motorsport events in India beyond F1 and international series.

At the end of the day, none of the 25,000 plus spectators who filled the upper and lower tier of the main grand stand section of the Buddh International Circuit on Sunday at the third JK Tyre Racing Championship weekend paid for the seats.

Neither did the 6,000-odd Sunday spectators for the final round of the National Racing Championship or the Sidvin Festival of Speed last year, when just lower-tier seating was made available.

But then maybe that wasn’t the point of attracting people in their thousands, using whatever promotional means available to them.

There is also, of course, the issue of entertainment tax that would get slapped on any ticketed event at the venue. JK Tyre personnel were very careful to spell out that the passes they were handing out were ‘by invitation’ only.

But making the long drive – in a car or on a bike – to the circuit is an investment in itself and it was heartening to see the grandstands nearly packed by the time the first JK Racing India Series (JKRIS) race on Sunday ended with Vishnu Prasad just managing to hold off Arjun Maini.

Neither was it a silent crowd, especially during the Volkswagen Stunt show, which probably did more to promote handbrake turns and bad driving habits than all the latest bootleg videos of Top Gear!

A CLOSE RUN THING
Then of course there was the racing. Maini and Prasad continued to be the top two contenders in the JKRIS with the FB-02 cars ever since Akhil Khushlani stopped participating at round two in Coimbatore.

Maini took two of the three wins on the weekend but there was little to choose between the two apart from their age difference. Prasad, who won this year’s National Karting Championship title in the Senior Max category, is 20-years-old now. Maini will be 16 in December and was one of the three finalists of the Sahara Force India ‘one in a billion’ talent hunt.

Both drivers admitted that they would have to count on mistakes from the other to get an advantage come raceday.

KRUGER DOMINATES
In the Volkswagen Polo R Cup, however, there is not as much ambiguity. South Africa’s Jeffrey Kruger was the class of the field as Rahil Noorani’s challenge faltered.
The Indians who have graduated from the Polo R Cup to participate in the Scirocco R Cup are yet to make a serious mark in touring car or sports car racing as of yet. However, the series does serve as a ladder of some sorts from the even more basic Toyota Etios Motor Racing series.

Former karters Rayomand Banajee and Ameya Walavalkar have been seen offering tips to drivers as well, so at least there is also some level of training.

SAROSH ALL THE WAY
Dark Don Racing’s experienced Sarosh Hataria could probably also teach newcomers a thing or two about driving in the LGB Formula 4 category if he wanted to. Including Prasad and commuters to the circuit as he rushed his way to a clean sweep of the races.

While Akhil Khushlani’s participation in the JK Racing India Series beyond the second round would have provided a better benchmark for the drivers in it, it is clear that Vishnu Prasad and Arjun Maini are setting the standard for others to follow.

Watching their battle at the Buddh International Circuit during the third round of the JK Tyre Racing Championship was interesting for reasons beyond the close racing.
Prasad is over 20-years-old now while Maini will turn 16 in December. The former has struggled on occasion to make ends meet in his motor sport budget while Maini has made the most of the support he has been getting from his father and former racer Gautam.

Prasad set out on the 2013 racing season with the clear intent to win three championships. He achieved one-third of that goal on the October 18 to 20 weekend by clinching the National Karting Championship. Sarosh Hataria has proved to be too big of an obstacle in LGB Formula 4, but even with Maini’s two wins in round three, Prasad looks the favourite to take the JKRIS title.

And there’s plenty at stake for Prasad than just bragging rights. Both the karting and JKRIS titles will earn the champion some valuable international exposure.
A slot at the Rotax Max World Karting Finals is assured for Prasad and Team Eurointernational – that runs the JK FB-02 cars – will arrange for a Formula 3 test for the JKRIS champion.

Prasad knows that age is not on his side either. “Ideally you see drivers of my age in GP3 and GP2, so I guess I better get a move on,” said Prasad.

Especially true with a young racer as dedicated as Maini. “I feel like I was born to race,” said Maini. “I can’t think of doing anything else and I don’t want to do anything else!”

By his own admission, Maini has a tough time thinking of anything but racing even while on the study table. Probably too busy looking for that gap to dive past Prasad while the latter keeps the door firmly shut. 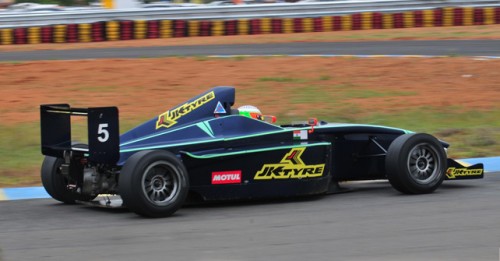