The war to be noticed starts early 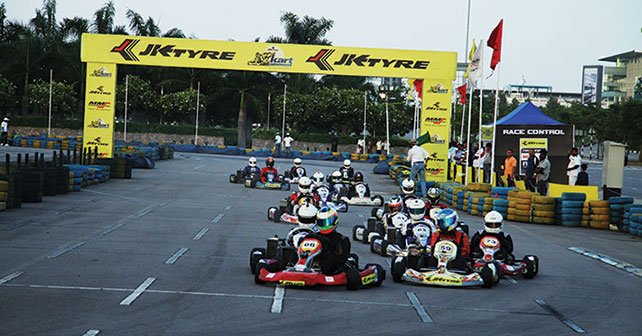 Surely You don’t need me to tell you that motor sport is an expensive passion to go nuts about. You know that very well, dont you?

And you know all about money and its growing importance in the very top ladder of motorsport; Formula 1.

No one even remotely interested in F1 believes that it is easy to break into it, let alone get paid money for being a professional race driver.

With an F1 round in India, however, and the modest beginning of a grassroots motor sport infrastructure in place the near impossible dream of being an F1 driver is alive in a new generation of young racers.

The quest to be considered the best prepared was quite apparent at the second round of the JK Tyre Rotax Max National Championship on July 13-14 at the Rajiv Gandhi International Airport in Hyderabad (well, technically Upal).

The fact that there were talented drivers out there was not in question at all. In the Senior Max category you had Ameya Bafna and Vishnu Prasad, the two previous national karting champions and Chittesh Mandody.

Krishnaraj Mahadhik, Mahaveer and Arya Gandhi stood out in Junior Max while the Micro Max category was all about Pradyumn V Danigund.

What was startling was the lengths to which drivers and teams were willing to go to in order to prove themselves as most worthy of advancement to car racing.
“Your capital investment can go as high up as 1.5 lakhs even before you get started with a race weekend,” said Meco Motorsport head and former single-seat racer Akbar Ebrahim. “You can even end up spending as much as eight to nine lakhs in a year in this depending on your finances.”

Ebrahim’s admission reminded me of an out of the blue conversation I started with his rival team owner of Rayo Racing, Rayomand Banajee, when quizzing him about how to get started in karting as a novice.

It was estimated that I would have to spend in the region of R 50,000 just to get kitted out with the right set of overalls, helmet, gloves, innerwear and shoes.
Then there were the scenes that unfolded at the karting weekend itself. You would be in the wrong place if you thought you could drive one of these karts like a rental.

Banajee makes it a point to have a GoPro camera fitted on his drivers’ helmets to review race footage and give pointers (three to four hour sessions are not unheard of). One of those are worth R 14,000 to R 24,000 (before purchasing mounting accessories).

Ebrahim had the services of a technician from a karting team based in Holland to help him find a performance edge.

Then came probably the biggest indicator of the pressure to succeed; expectant parents, especially in the Micro and Junior Max categories (7 to 12 years of age and 12 to 16 years of age, respectively).

At times, race officials had to tell parents to exercise restraint when talking to flag marshals and lay out clear instructions on where they could or could not go.
All of this was in the hopes of catching the sort of break that former Rayo Racing karter Jehan Daruvala is taking advantage of as part of Sahara Force India’s ‘One in a billion’ program.

Stuff like that tends to put you on the map. To the extent that former F1 race winner Johnny Herbert mentioned him by name to me at last year’s Indian Grand Prix.
Stuff like that gets one dreaming.