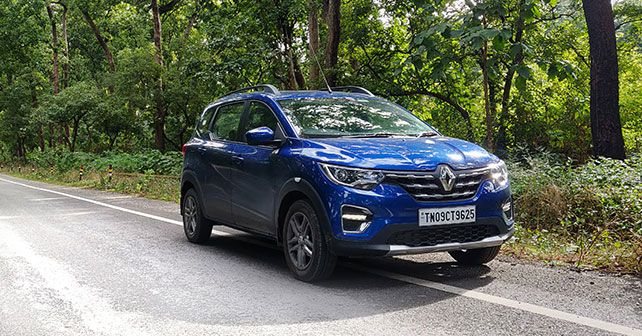 Usually, I prefer motorcycles to cars for commuting in cities. The reason is simple – it saves me a heck of a lot of time, and riding a motorcycle is not half as infuriating as driving a car in peak hour traffic. But last month, it got bone-chillingly cold here in Delhi, so, naturally, I ditched my motorcycle and used the Triber. And within a few days of driving to work, I realised that the Triber has turned me into a driving monk!

You see, unlike other cars, the Triber has somewhat calmed me down as a driver. Now, I am not implying that it’s the most refined car in the segment – it’s not! In fact, the engine sounds very gruff during cold starts and even in traffic, the drivetrain feels very harsh. Plus, it’s not a car to drive enthusiastically. But, truth be told, I kind of like that fact – the fact that it’s a relatively slow car. I don’t know about other road users, but the Triber’s relaxed pace has forced me to be non-competitive on the road. I don’t fight for a tight spot in traffic, I don’t chase someone down if they cut me off, and I don’t get into traffic light drag races anymore. Instead, I stick to a lane, connect my music using Android Auto, and just drive leisurely without a care in the world.  However, if there’s one thing that makes me lose my cool while driving this car – the lack of steering audio controls.