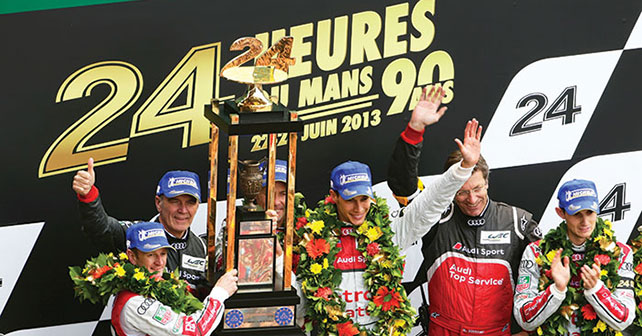 Even if you are a neutral fan of Endurance sportscar racing and not particularly turned on by Audi’s near decade and a half long domination of the 24 Hours of Le Mans, it is still a great time to follow the greatest sportscar race in the world.

There is the tense battle Audi is waging with Toyota as both manufacturer squads try to prove that they have the best handle on hybrid technology. And while Audi has maintained that an undertaking like Formula 1 is not relevant for them, they haven’t been above taking a helping hand from F1-derived technology.

The German squad won its 12th overall Le Mans title in 14 years and second in as many years with the R18 e-tron Quattro, a diesel-electric hybrid fitted with a flywheel based energy recovery system that was initially developed by Williams F1 for their 2009 Grand Prix machine.

As if the battle between two of the biggest automobile groups in the world with some of the best drivers in the business wasn’t enough, there’s also the matter of what all is to come in 2014 and beyond.

Porsche’s return to the legendary race next year officially took shape with its LMP1 challenger being unveiled while testing in Germany as was the driver who would get behind the wheel of it.

Having had his fill of Sebastian Vettel and Red Bull Racing’s machinations, Australian Mark Webber will return to sportscar racing where he gained infamy as the driver of Mercedes’ notoriously ‘airborne’ CLK GTR in 1999.

Porsche’s return is believed to be a source of friction between it and Audi, both of whom come under the Volkswagen Group umbrella.
Idle speculation has Audi linked with a foray into F1 in the near future in the wake of Porsche’s Le Mans entry, due to F1’s adoption of the ‘green’ 1.6-litre, turbocharged, Energy Recovery System, V-6 units.

However, it is far more likely for F1’s new powertrains to be featured at Le Mans before an existing manufacturer decides to switch disciplines in order to avail of the new engine formula.

French sportscar manufacturer Alpine is believed to be in line to receive a powered down version of Renault’s 2014-spec F1 engine for use in the LMP1 category. It would be in line with the intention of the International Automobile Federations’ (FIA) plan for the engine formula to become a ‘universal’ one for its racing disciplines. An added bonus for the FIA would be for more manufacturers to follow Honda back to F1 as well.

However, even a new F1 engine pales in comparison to the more radical ideas featured in the great race’s ‘Garage 56’ entry. The entry slot is reserved for alternatively powered vehicles and next year will see the evolution of Nissan’s Batmobile-esque Deltawing racecar in the ZEOD RC.

The futuristic closed-cockpit racer is intended to be a test-bed for Nissan’s future electric propulsion systems. Even though the ZEOD RC itself is not fully electric, technologies like zero emission settings are intended to be tested and developed using it as the ultimate laboratory on four wheels.

Let’s just hope the car fares better than the diminutive Deltawing itself last year that got punted out by Toyota’s hybrid entry!