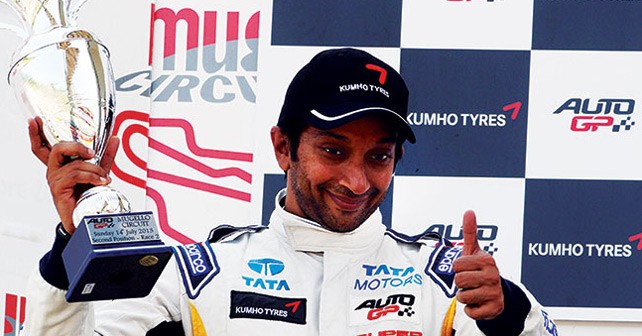 Former Jordan and HRT F1 team racer Narain Karthikeyan scored the second win of his inaugural Auto GP World Series season at Mugello in Italy on the 13-14 July weekend. Karthikeyan enjoyed a strong weekend as he scored his second pole position of the season (following the previous round at Silverstone) before taking third place in the opening race of the weekend.

He followed it up by setting the fastest lap of the second and final race in which he emerged victorious ahead of all three of the drivers who currently hold the top three positions in the series’ points standings.

Sergio Campana and Kimiya Sato lead the standings tied on 138 points each and are trailed by Vittorio Ghirelli who is on 125. Karthikeyan is a clear fourth in the standings with 95 points to his name.

Only three rounds of the series remains with a maximum of 47 points on offer for a driver who can win both races of a weekend and also claim pole position and fastest lap. A tall order for Karthikeyan even with some much needed momentum on his side.