Blasting to the clouds - Motorsports 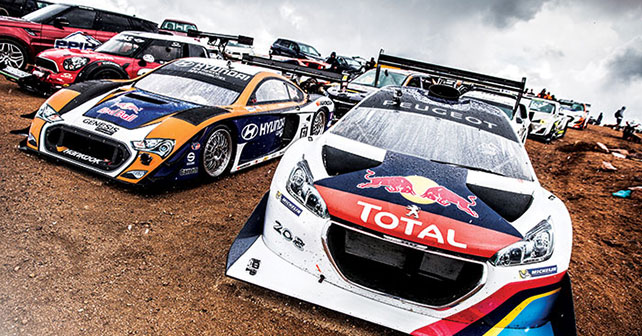 Motor sport is a funny old thing. It is often dismissed as a useless, expensive and time consuming exercise that drains amateurs and private participants of their hard earned money or a surefire way for a car manufacturer to have a red section on its balance sheet.

And yet whenever there is a major motorsport event, car company executives and passionate junkies still line up to be a part of the spectacle. It is especially true if that car company has something in the way of a motor sport legacy to fall back on.

In the case of France’s Peugeot, that legacy is headlined by its foray in the World Rally Championship as well as non-championship events like the Dakar Rally and the Pikes Peak International Hillclimb.

Peugeot got a nice ‘little’ boost as far as its legacy is concerned on June 30 this year when nine-time defending WRC champion Sebastien Loeb piloted a 208 T16 to a stunning record time at Pikes Peak of 8:13.878. Loeb’s time was almost 1:40 faster than the previous mark of 9:51.278 set by Nobuhiro ‘monster’ Tajima in 2011. The average speed of Loeb’s run was an amazing 145.27 kmph.

The two times are, in all fairness, impossible to compare as Tajima’s time was set in the last year of the course having dirt sections on it before it was fully paved in August that year.

But while the difference in surfaces takes a little away from the comparison it still does no harm to either Loeb’s or Peugeot’s reputations as motor sport legends.
It was a reputation that got well and truly set in motion long before the time of Loeb’s participation and subsequent domination of the world of rallying. For that one would need to rewind to the 1980s.

In the hands of drivers like Finland’s 1981 world champion Ari Vatanen, the 205 gained cult status among car nuts and the 205 T16 and later the 405 T16 further cemented the French marque’s reputation in the world of motor sport, including at Pikes Peak.

The 405 T16 in particular was immortalized in the 1989 documentary short ‘Climb Dance’ by Jean Louis Mourey, which has a credited cast of just one. Well…two if you count Vatanen and his monstrous 600 bhp 405 T16.

Group B rallying banned by the International Automobile Federation (FIA) in the WRC following the death of Henri Toivonen and co-driver Sergio Cresto in the 1986 Tour de Corse. The two were representing Lancia in a Delta S4 that was the epitome of ‘Formula 1 on gravel’, as Group B had often been referred to.

Start of the Arms Race
With cars producing well in excess of 500 bhp and capable of accelerating to 100 kmph in under three seconds, the FIA could not afford to have its top rallying stars bite the dust in the quest to be the fastest over a rally stage. Especially since Toivonen’s death came just four years after F1 lost its resident superstar during a race weekend as well, in Gilles Villeneuve.

Group B cars migrated to one-off annual events like Pikes Peak and even after they were banned from the WRC, legends like Walter Rohrl and Vatanen secured their immortality.

Vatanen’s successful effort to beat Rohrl’s 1987 record time of 10:47.850 over the fast and treacherous 19.99 km part tarmac-part gravel course was immortalized in ‘Climb Dance’ and cemented Pikes Peak’s (which started in 1981) status as a highlight on the motorsport calendar.

The Finn – who in 2009 ran against former Peugeot rally boss Jean Todt in the FIA’s presidential election – set a time that was just 0.630 seconds faster than Rohrl’s mark and remained king of the peak until Tajima went three seconds faster in his Suzuki Swift in 1993.

The Japanese remained the star attraction of the event and it can be argued that he was a more significant entry than Loeb at this year’s event as well.
Tajima has turned his back on the Unlimited class in which Loeb’s 875 bhp 208 T16 has made its mark in favour of the Electric category.

And sure enough, ‘monster’ has another record to his name. Behind the wheel of his custom-made E-Runner Pikes Peak Special, Tajima set the benchmark for electric powered vehicles with a time of 9:46.530.

The Lithium-ion battery powered car was a long way off the ‘conventional’ internal combustion engine racers but still managed to set an average time of 122.8 kmph over the course’s 156 turns.

No mean feat and a sign of how far electric racing cars have come. However, the sad (if you think about it) truth is that such projects are unlikely to find favour with the majority of regular motor sport fans.

After sight, the biggest attraction to race cars is provided by sound. Which means even if Tajima ends up beating Loeb’s mark in his electric entry, it would take a lot of beating to emerge as winner in the minds of a generation of fanatics brought up on noisy winners…and of course, ‘Climb Dance’.

ON TWO WHEELS
Beyond Loeb’s destruction of the Pikes Peak record mark and Tajima’s new benchmark in electric vehicles, the motorbikes section got its brief moment in the sun too.
Thanks, first, to being allowed to run before the cars and second, thanks to Red Bull streaming the entire event live on its website.

Bikes had previously gotten a raw deal at ‘The Race to the Clouds’ due to being compromised on their runs by all the oil, dirt and debris left behind by the four-wheel competitors that preceded them.

Not to mention with the cars being the main attraction at the event, the riders got something of a raw deal in terms of visibility.
No less than eight records in the ten bike categories were broken this year including in the vintage bike, sidecar and quad modified section.

Three of the four main attractions within the bike sections saw improved times with records set in the 250cc, 450cc and 750cc category.

However, the record set in the previous year by the Ducati Multistrada 1200 of Carlin Dunne in the 1205cc category remained intact at 9:52.819, which comes out to an average speed of 121.4 kmph.

Not a whole lot slower than Tajima’s best time set in the electric race car this year – only six seconds slower, in fact.
A more direct comparison, however was Dunne’s time set in the Exhibitions Powersports (Electric) category on board his Lightning Electric Superbike. An average speed of 115.7 kmph went along with a time of 10:00.694.

A time almost 31 seconds faster than the best mark set in the 750cc category. It is a feat that – just like in the car section – points to a lot of potential in the electric vehicle segment, especially in motorsport.

However, just like with the cars, would motoring nutters go nuts for vehicles that produce no sound but are extremely fast to drive and ride?

Maybe that’s an answer best left for when that particular section of vehicles well and truly takes over from its internal combustion counterpart and come out victorious in the race to the clouds and conquer other motorsport summits as well.