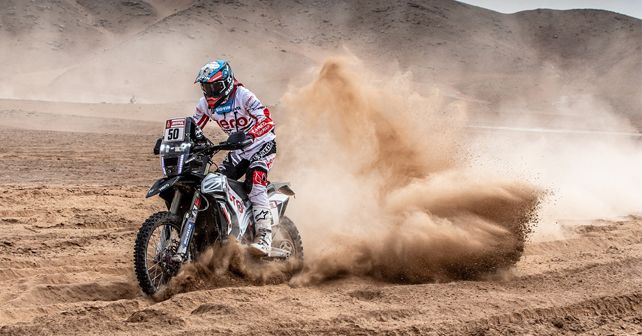 The fifth day of the Dakar 2019 turned out to be a disastrous affair for Indian rider CS Santosh as his hopes of finishing this year’s rally ended after an unfortunate crash. The Hero MotoSports rider suffered a horrid fall between waypoint 4 and 5 of the marathon stage 5. Santosh had to be airlifted since he was badly injured from the crash, but his condition is reported to be stable now.

While Santosh’s run in Dakar 2019 ended prematurely, his teammates, Joaquim Rodrigues and Oriol Mena, are still going strong, albeit they were also a bit bruised after the extremely tough stage. Both the riders also crashed in the day, but managed to finish the stage. Mena continued his form and retained his overnight position of 12th as he finished the stage in 16th place, while Rodrigues climbed up three positions in overall standings to 28th position as he was 18th in stage 5.

For Sherco TVS, things were completely different and they ended the day on a high, thanks to Lorenzo Santolino stunning performance as he set the third fastest time in stage 5! Santolino is now placed 11th overall and if he continues this form, he will soon be in the top ten overall. The Metge brothers – Adrien and Michael – also had a fairly steady run as they finished the stage in 24th and 29th position, respectively. Adrien is placed 16th overall, while Michael is 24th. Last but not least, Aravind KP, the only Indian rider remaining in this year’s Dakar after Santosh’s crash, finished the stage in 53rd position and moved up to 54th in the overall classification.

As for the leaders, Sam Sunderland of KTM Factory Racing was quickest in stage 5, ahead of Xavier De Soultriat of Yamaha Factory Racing, and Santolino. In overall rankings, Ricky Brabec (Honda) is still leading, but Sunderland has climbed up to the second spot, ahead of Pablo Quintanilla of Husqvarna Factory Racing.

In cars category, nine-time WRC champion Sebastian Loeb (Peugeot) dominated the proceedings on the fifth day to finish the stage as the quickest driver. He was followed by Nasser Al-Attiyah (Toyota) in second and Nani Roma (Mini) in third. Al-Attiyah, however, leads in overall rankings from Stephane Peterhansel (Mini) and Roma.