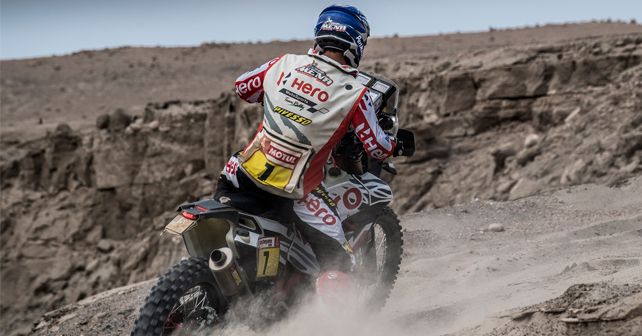 The third stage of Dakar 2019 turned out to be a tricky affair for participants as expected. With the going getting tougher and rougher than the first two days, the third stage saw a lot of mishaps and retirements from the rally. In fact, stage 3 could very well be the turning point in deciding the outcome of the rally.

Starting with the Indian teams, let’s first talk about Hero MotoSports’ performance on the third day. CS Santosh and Joaquim Rodrigues both had a tough day – JRod lost a lot of time at a tricky waypoint, while Santosh met with a few crashes and then lost some more time around the same waypoint as JRod. As a result, Rodrigues finished the stage in 46th position, while Santosh was 64th. In the overall rankings, Rodrigues is placed 31st, but Santosh slipped down to 42nd from 33rd on day 2.

On the other hand, Oriol Mena’s performance brought some cheer to the Hero camp. Mena rode skillfully throughout the day and managed to break into the top 10 as he finished the stage in 8th position. Overall, he’s now in 12th place – an improvement of four places from stage 2. 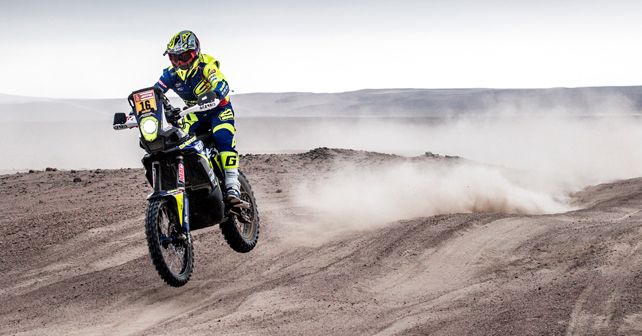 Sherco TVS team had a difficult day too, but they had more ups than downs on day three. Lorenzo Santolino continued his impressive run and finished the stage at 10th position. With his calculated performance, he only lost one place in the overall rankings and finished the day at 13th position.

The best performance of the day for the team came from Michael Metge though. He finished the stage in the top 15 and improved his overall ranking to 28th, which is super impressive given the fact that he was 60th on day 2. His brother, Adrien Metge, on the other hand, had an equally good day as well and he finished the day in 15th position overall. India’s Aravind KP progressed steadily on the third day and maintained his 61st position.

At the front, things changed drastically as Honda’s Joan Barreda, who was leading the rally on day 2, retired owing to a nasty crash, where he got stuck badly and had to be rescued by helicopter. Even KTM’s Matthias Walkner and Barreda’s teammate Ricky Brabec lost a lot of time and slipped out of the top 3. Amidst all this, Yamaha rider Xavier de Soultrait benefitted from the top three’s woes and won the stage. He was followed by Husqvarna’s Pablo Quintanilla in second place. Honda’s Kevin Benavides finished the stage in 3rd position. In overall rankings, Quintanilla now leads and is followed by Benavides in second and Sam Sunderland (Honda) in third.

In cars category, thirteen-time Dakar winner Stephane Peterhansel took the stage win on the third day, ahead of Nasser al-Attiyah and Jakub Przygonski. Overall, al-Attiyah is back in the lead, followed by Giniel de Villiers and Yazeed Al-Rajhi. Defending champion Carlos Sainz suffered a major mechanical issue, which resulted in him going out of the top ten.