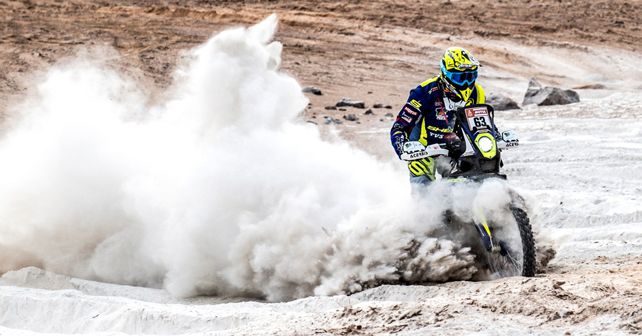 Lorenzo Santolino of Sherco TVS managed to break into the top ten on day 4. The Dakar rookie showed impressive pace throughout the tough and treacherous terrain during the first marathon stage fo the rally so far, as he completed the 405km special stage in 3 hours 57 minutes and 32 seconds. Hero MotoSports’ Oriol Mena was hot on his heels and finished the stage just 14 seconds behind. However, it’s Mena (12th overall) who is placed one place ahead of Santolino after completion of four stages.

Apart from these two, Sherco TVS’ Michael Metge finished the stage in 17th position and is now placed 26th overall. His brother and teammate Adrien Metge managed to take 21st position on day 4, meaning his overall ranking slipped by a place to 16th spot. Hero’s Joaquim Rodrigues had a cautious run and held on to his 31st position overall. As for the Indian riders, CS Santosh is now running 44th overall after finishing the stage in 51st position, while Aravind KP is now placed 64th overall.

As for the stage winners, Ricky Brabec of Honda (3h40m30s) was the quickest on day 4 to complete the stage, ahead of Matthias Walkner and Toby Price of KTM Factory Racing. Brabec's performance on the fourth day promoted him to the top in overall rankings. Behind him are Pablo Quintanilla (Husqvarna) and Price in second and third, respectively.

In cars category, Nasser Al-Attiyah (Toyota) topped the fourth stage and, thereby, extended his advantage at the top after four days of action. In the overall rankings, he’s been chased by Stephane Peterhansel and Nani Roma, who are second and third, respectively.