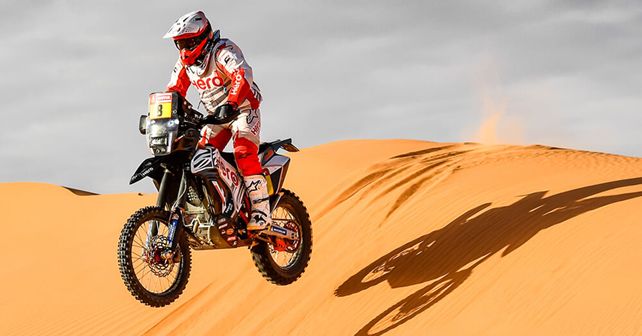 The 830km (477km Special Stage) Stage 6 of the 2020 Dakar Rally, which is also the longest stage of the rally so far, marks the halfway point of the competition, with riders heading into the essential rest day of the marathon. However, Stage 6 proved to be a surefire test of the Indian contingent's capabilities, resulting in some damage to both the Indian outfits. Team Sherco-TVS' Johnny Aubert (#20) and Hero Motorsports' Sebastian Bühler (#32) bit the dust as Aubert endured a massive crash just 2km from the finish line and suffered head & rib injuries. Bühler, who was Hero's frontrunner in the competition so far, was ruled out of the competition due to a mechanical failure. He'll be joining Joaquim Rodrigues (Hero Motosports) & Harith Noah (Sherco TVS) in the Dakar Experience Class, wherein they'll be competing in the remaining stages without being in contention for overall rankings. The same can't be said for Johnny Aubert yet, as the extent of his injuries is yet to be confirmed. 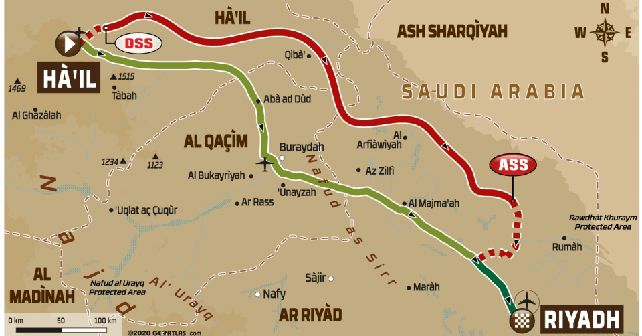 Coming to the riders who are still in the competition, Sherco TVS riders Adrien Metge (#11) and Lorenzo Santolino (#24) are yet to enter the overall top 10 as Metge continues to hold 11th place overall after a third consecutive stage, while teammate Santolino has dropped back another place to 16th overall. On the other hand, it looks like Hero MotoSports riders CS Santosh and Paulo Goncalves might just give the TVS riders a fight for their money in the final stages of the competition, given their state of progress. Goncalves earned Hero their (and his) third consecutive top-10 stage finish, finishing Stage 6 in 8th. With this, he's jumped up 13 positions in the overall rankings to reach 46th overall. His teammate Santosh continues to improve slowly as he's up to 36th overall, from 39th.

In the overall rankings (Bikes), Ricky Brabec (Moster Energy Honda) got the ultimate push heading into the rest day as he secured his second stage win of the season, at the expense of his closest rivals Toby Price (Red Bull KTM) and teammate Kevin Benavides falling prey to mechanical problems. Consequently, Pablo Quintanilla (Rockstar Energy Husqvarna) has replaced Toby Price to take second overall, while Price himself has bumped out Benavides out of the top three to take the third spot for himself. Brabec now leads the marathon with a lead of over 20 minutes!

Red Bull KTM rider Toby Price became the first double stage winner of the 2020 Dakar Rally by securing victory in Stage 5. This has pushed him up to second overall, behind a very consistent Ricky Brabec (Moster Energy Honda). However, Price has managed to break the Honda 1-2-3. Brabec, despite finishing the stage in fourth, still holds the lead with his teammate Kevin Benavides dropping a place behind to third overall. Both Honda riders Benavides & Jose Cornejo Florimo faced issues in today's stage, which gave Price the ultimate advantage to edge ahead. Meanwhile, Price's teammate Sam Sunderland was struck by more bad luck as his 2020 Dakar outing came to a close today after a heavy crash. He has sustained shoulder & back injuries that have ruled him out of the competition.

In the Cars category, X-Raid Mini buggy driver Stephane Peterhansel outpaced his teammate and current marathon leader Carlos Sainz to fetch team Bahrain JCW X-Raid its fourth consecutive 2020 Dakar Rally Stage win. However, thanks to Sainz' comfortable lead and Peterhansel's time loss in Stage 5, Sainz continues to be on top in the overall rankings and Peterhansel is yet to surpass Toyota Gazoo Racing's Nasser Al-Attiyah as the latter continues to hold second place overall. Al-Attiyah finished Stage 6 in third place.