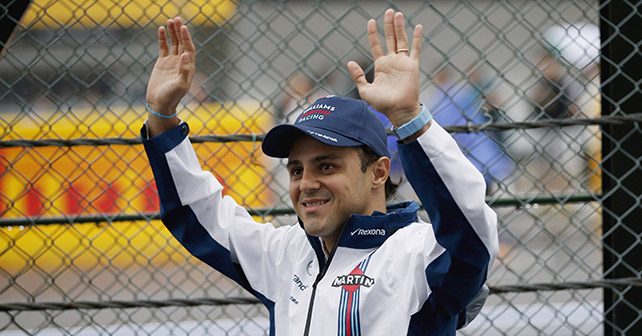 Felipe Massa has announced that he will retire from Formula One after the 2016 season.

Bringing an end to a 14 year run in Formula One, Felippa Massa has decided that he will move on to greener pastures after the end of the 2016 season. Massa will finish his F1 career with a total of 250 grand prix starts to his name.

The Brazilian driver started off his career when he debut for Sauber in 2002, followed by a sabbatical year with Ferrari as a test driver. Massa returned to Sauber for 2004-05 after which he re-joined Ferrari as a permanent driver to race along side Michael Schumacher. Massa raced for the Italian team for eight seasons racing along side Schumacher, Kimi Raikkonen and Fernando Alonso, being the second-longest serving driver after Schumacher. He then moved to Williams Martini Racing in 2014 and now after three full seasons with the British team, with 41 podiums, 11 wins, 16 pole positions and 15 fastest laps to his name, Massa will retire from the sport as the end of the season.

Massa decided to announce his retirement at Monza, just prior the Italian Grand Prix, where Schumacher had announced his first retirement which allowed Massa to continue racing for Ferrari and continue his F1 career.

“My career has been more than I ever expected and I am proud of what I have achieved,” said Massa. “Finally, it is a great honour to finish my career at such an amazing team as Williams Martini Racing. It will be an emotional day when I finally conclude my Formula One career with my 250th Grand Prix start in Abu Dhabi.”

Following the Belgian GP, where Max Verstappen’s move on the Ferrari’s in the race seemed questionable by some, Raikkonen and Vettel did pay a visit to the stewards for a talk about the young Dutchman’s driving style.

Raikkonen commented “Personally I have nothing against Max. He is doing a good job and he’s fast. It's not a personal thing but certain things, at least in my feeling, were not correct if you have to slow down or brake under full speed but those things are never ending discussions but let’s see what happens.”

“Not really an awful lot to discuss except probably he said sorry and I said OK and you know we go forward. It wasn’t ideal for us or any of the three to be involved, but that’s how it goes sometimes,” he added.

Responding to the criticism, Verstappen felt he shouldn’t have to change his driving style just because other drivers on the gird think he should. He said “all these talks are a bit foolish. You, of course, want to defend your position - and if somebody wants to attack that’s up to him. And just because somebody eventually says that you should change your driving style… that’s nonsense.”

After his massive accident on top of the hill at Eau Rouge during the Belgian GP, Kevin Magnussen had suffered a minor injury to his ankle during the crash from which he has now recovered. Magnussen has been medically cleared to race for the Italian GP for Renault.