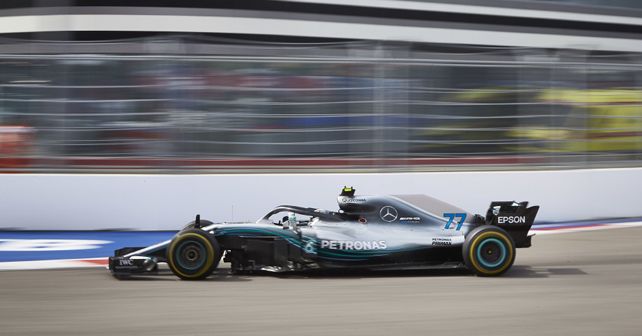 Valtteri Bottas of Mercedes-AMG F1 pipped his teammate Lewis Hamilton to claim his second pole position of the season at Sochi, Russia. Mercedes’ arch-rival Scuderia Ferrari looked a little out of touch and couldn’t quite challenge the Mercedes duo in qualifying, with Sebastian Vettel settling for the third spot.

Since Bottas took his maiden F1 win at this very circuit last year, it was understood that he’d try his best to repeat the performance from 2017. That said, initially, it was teammate Hamilton who was quicker in both Q1 and Q2 sessions. However, in the penultimate run in Q3, Bottas beat Hamilton by just 0.004s when the duo was sent out for their first qualifying laps. There wasn’t much to choose between the two –  Hamilton was quicker in the first sector, but Bottas would always balance that out in the middle sector. In their second runs, Bottas improved his lap time to 1m31.528s, while Hamilton, although quicker in the first sector again, made a mistake at turn 7 and ran out wide. As a result, he couldn’t challenge Bottas and had to settle for the second position.

Ferrari’s performance was a little underwhelming today, especially considering the fact that despite Hamilton’s mistake, Vettel couldn’t match the pace of the Mercedes boys. Vettel was nearly half a second slower than Bottas’s pole time. And that's no good news for his title hopes as he’s already 40 points down on Hamilton.

Starting fourth will be Ferrari’s Kimi Raikkonen. Behind him will be Kevin Magnussen in fifth in his Haas. Racing Points Force India’s Esteban Ocon will start sixth, followed by Sauber’s Charles Leclerc in seventh. Force India’s Sergio Perez will be eighth and Haas’ Romain Grosjean in ninth. Leclerc’s teammate Marcus Ericsson rounded out the top ten.

Red Bull decided not to enter in Q2, owing to the fact both their drivers have been given grid penalties for changing power units earlier this week. They’ll be starting in 13th and 14th, respectively.