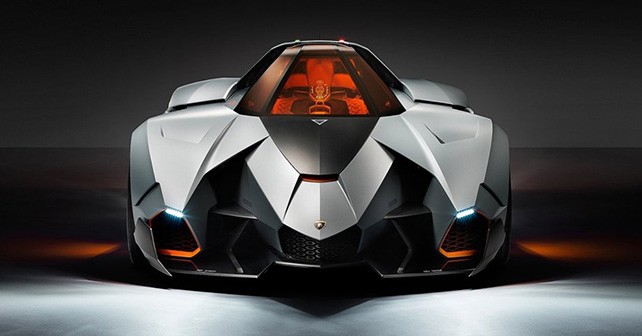 We got you news about the Lamborghini Egoista yesterday and as promised here are some of the details. If you were wondering about the name, Walter De Silva’s, Head of Design for the Volkswagen Group,  puts it aptly when he says, “It’s as if Ferruccio Lamborghini were saying: I’m going to put the engine in the back, I don’t want a passenger. I want it for myself, and I want it as I imagine it to be. It is a fanatical vehicle, Egoista fits it well.”

The Egoista was designed to violate the rules that limit road-going cars; it's front-end looks as if it could slice a pedestrian into half. Its design inspiration in the Apache helicopter, no wonder it looks menacing. In place of traditional headlamps, Lamborghini has fitted LED warning lights buried in the recesses of the three-pod design.

The cockpit gets an orange-tint and has bare minimum of instruments. Most gauges are replaced by a heads-up display, which is very innovative. The cockpit canopy slides forward for entry and exit but Lamborghini tells us how to do it better, "To get out of the vehicle, the driver must remove the steering wheel and rest it on the dashboard, open the dome with an electronic command, stand up in their seat, sit down on a precise point of the left-hand bodywork, then swivel their legs 180 degrees from the inside of the cockpit to the outside of the vehicle. At this point they can set their feet down and stand up."

For all those thinking about the Tumbler from the Batman series, well this is right up there. The Lamborghini Egoista comes with a 600bhp churning 5.2-litre V10 engine and maybe the driver of one of these will require a pilots license too. Lamborghini clears the air by saying it will never build or sell the Egoista. Keeping it all to themselves, how selfish!