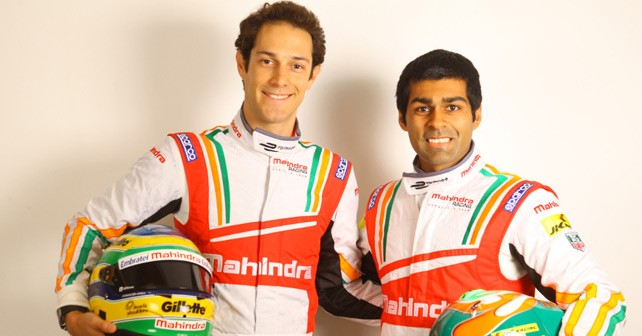 The inaugural Formula E raceday is still some months away (13 September in Beijing, to be exact) but news about the all-electric single seat series keeps coming thick and fast.

With all the participating teams announced - including India's very own Mahindra Racing - the racers who are in the championship's 'Drivers Club' are being drafted by the ten teams on the grid.

It has so far been confirmed that Audi Sport ABT will field Daniel Abt and Lucas di Grassi while Virgin Racing will call upon the services of former F1 driver Jaime Alguersuari and Sam Bird.

This past week saw Mahindra Racing confirm the participation of Bruno Senna (former Formula 1 driver and nephew of legendary racer Ayrton) as well as India's second F1 driver Karun Chandhok, whose signing did not exactly come as a surprise.

Senna and Chandhok have previously been teammates in GP2 (2008) and F1 (2010) and while opinion is divided on their proficiency as top level single seat drivers their inclusion in the Mahindra Racing ranks should come as a powerful marketing boost not just for the Indian manufacturer but Formula E itself.

Mahindra has a presence in the Brazilian auto market as it sells both the Scorpio SUV as well as its derivative commercial vehicle, the 'Pik-Up' (along with tractors). Signing a Brazilian driver with an extremely famous last name, family history and helmet livery is sure to have its advantages.

And in its home market of India Mahindra could not have asked for a more media savvy driver in Chandhok who frequently appears as a commentator and 'pundit' in various forms of media such as television, newspapers and the world wide web.

Both Senna and Chandhok have also tasted varying levels of success in endurance racing.

Senna was part of a team of drivers that scored two Le Mans Series podiums in 2009 (a precursor to the current FIA World Endurance Championship) and two wins in the Le Mans GTE Pro class of the WEC last year.

Chandhok has been part of a team that finished sixth overall in the Le Mans Prototype 1 class at the 2012 24 Hours of Le Mans followed by a 13th place overall finish at the storied event last year while in the LMP2 class.

Close on the heels of Mahindra Racing's announcement American entrants Andretti Autosport confirmed the signing of France's Franck Montagny who has previously raced for the team in the American Le Mans Series in 2008 and then in Indycar in 2009 as well as at the Grand Prix of Indianapolis this year.