Luis Salom and the question of safety in MotoGP 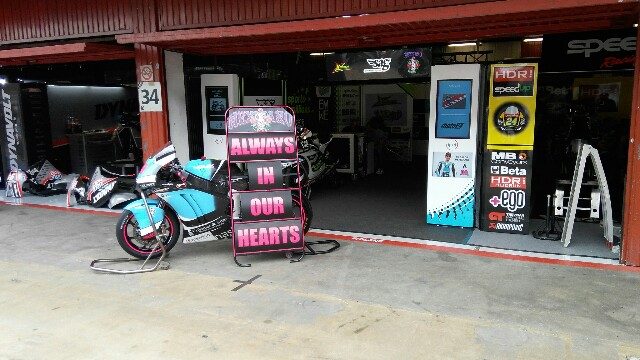 While it was business as usual for the riders, teams, sponsors, and throng of spectators in the stand as well as in the paddock, the Catalan GP had a sombre mood about it on account of the death of Moto 2 rider Luis Salom during second free practice on Friday.

Along with riders sporting black shirts with tributes to Salom on the podium and a minute's silence on Sunday following the warm-up sessions for all three classes, a press conference was held on Saturday with the CEO of MotoGP's commercial head Carmelo Ezpeleta and the safety officer for the FIM - the sport's governing body - Franco Uncini fielding questions from reporters who wanted answers.

Among the points brought up were the positioning of the air fence at turn 12 - where Salom crashed after losing control of his bike on turn 11 - as well as the placing of a tarmac run-off area instead of a gravel trap. The high grip asphalt had little effect in slowing down Salom as he hurtled towards it. It was a modification made keeping the Formula 1 race in mind where tarmac run-offs have all but replaced traditional gravel traps.

Ironically, when it came to the question of continuing with the race weekend, riders all but unanimously agreed to continue provided the F1 chicane at the penultimate corner of the 4.655 km Circuit de Barcelona-Catalunya was used.

Longer-term answers were, however, hard to come by when it came to the point of how to avoid such accidents. The inherent danger of motorcycle racing, as compared to cars, is something the riders are well aware of. However, unlike an absolutely deadly event like the Isle of Man TT (two riders died in crashes in this year's event), there is a feeling of racing in a more controlled environment when it comes to circuit racing.

It sounds ridiculous, I know, especially when you see these machines blast down the straight at speeds of over 340km/h. But advances have been made in rider safety since the 1970s till contemporary times where racing leathers have improved and there are even airbags placed in them in the MotoGP class.

But Salom's accident is proof that one can never expect total safety in this sport. After all, how does one know if a bike will hit a rider after rebounding from an air fence, as happened with Salom?

Ezpeleta stated that the danger would always exist in MotoGP as long as the top speed on the straights remained high. Reducing them is a tricky conondrum, however. Do you place a cap on the engine revs? Severely reduce the power output? The only race on modern circuits like the Buddh International Circuit, Circuit of the Americas and the Losail Circuit in Qatar?

The Circuit de Barcelona-Catalunya is in its 25th year of hosting top-level motorsport and even though it has been excellently maintained, grip issues have become very prominent this year. Mainly on account of new official tyre supplier Michelin getting to grips with MotoGP, literally!

The French tyre manufacturing giant has brought an entirely new compound for the Catalan GP and riders are having to understand how much and for how long they can push it.

The Moto2 and Moto3 classes use Dunlop rubber but that too would work better at the newer venues with smoother surfaces than the popular venue in Montmelo.

So does MotoGP abandon racing at venues like Philip Island that are spectacular and spectator-friendly but inherently more dangerous than the new Grade 1 venues?

It ultimately comes down to how much danger the riders and fans are willing to accept. It is unlikely that the death rates of the Isle of Man would ever be accepted in a sport that wants to dominate the airwaves and attract family money and big-name sponsors.

F1 went through a similar phase before buckling down on safety, which was among the many reasons it became a staple on television. And Jules Bianchi's death and its fallout are proof of the worst coming to pass if measures are not taken to keep competitors safe.

In comparison, MotoGP and bike racing will never be entirely safe. No matter how much people want it to be. It is perhaps a morbid conclusion to come to, but the deaths of riders like Salom and Marco Simoncelli and Daijiro Katoh before him (Suzuka has never again been used in MotoGP since Katoh's death there in 2003) will likely continue and all the governing bodies can do is continue to react. A never-ending battle...