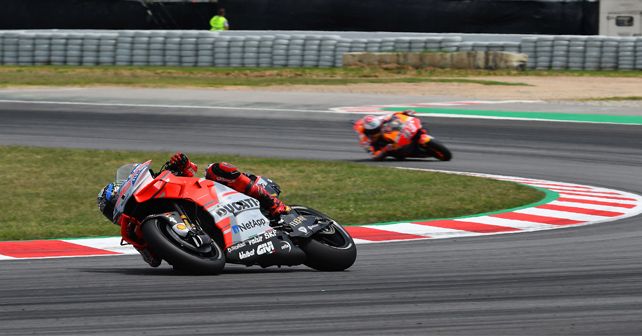 Ducati's Jorge Lorenzo makes it two in a row with yet another dominant win at Catalunya.

It may have taken Jorge Lorenzo a while, but it seems he’s finally got the hang of the Ducati. After taking his first win with Ducati two weeks ago in Mugello, the Spaniard repeated the same at his home Grand Prix in Catalunya, making it back-to-back wins for Ducati. The winning Ducati rider was joined by Repsol Honda’s Marc Marquez and Movistar Yamaha’s Valentino Rossi on the podium.

In the practice session over the race weekend, it was evident that Lorenzo was the man to beat with his phenomenal race pace. To make matters worse for his rivals, he also managed to take pole position. As soon as the lights went off, everyone expected Lorenzo to take a holeshot and disappear into the distance. However, it was Marquez who flew off the line from second in the grid to take lead from Lorenzo. Lorenzo was momentarily in third behind Marquez and Suzuki’s Andrea Iannone, but by the start of lap two, he was leading again. For the rest of the 23 laps, he wasn’t going to be challenged.

Marquez tried his best to hang behind Lorenzo, but he didn’t seem to have an answer for Lorenzo’s metronomic pace. Behind Marquez was Ducati’s Andrea Dovizioso in third. However, in an attempt to keep up with the leading group, Dovizioso crashed on lap 16. Once Dovizioso was down, Marquez eased off a little and settled for second place so as to extend his championship lead further. You could also say that Marquez and his Honda weren’t a match for Lorenzo and Ducati’s speed in the race today.

Benefitting from Dovizioso’s fall was Rossi, who finished the race on the podium yet again. After having a long tussle with Dani Pedrosa, Cal Crutchlow of LCR Honda got the better of him in the closing laps and finished fourth. Behind Pedrosa, it was Maverick Vinales (Movistar Yamaha) who again made a late, late charge to finish sixth, after what was another disastrous start. Monster Tech 3 Yamaha’s Johan Zarco managed to take the seventh spot, ahead of Pramac Ducati’s Danilo Petrucci in eight. Alvaro Bautista (ninth) of Angel Nieto Ducati and Iannone rounded out the top ten.

After the Catalan GP, Marquez (115) has extended his championship lead to 27 points over Rossi (88). Vinales is still in the top three with 77 points. But, thanks to his back-to-back wins, Lorenzo (66) has moved up to seventh place, ahead of his teammate Dovizioso. If Lorenzo continues his form the same way, he may soon be a championship contender.