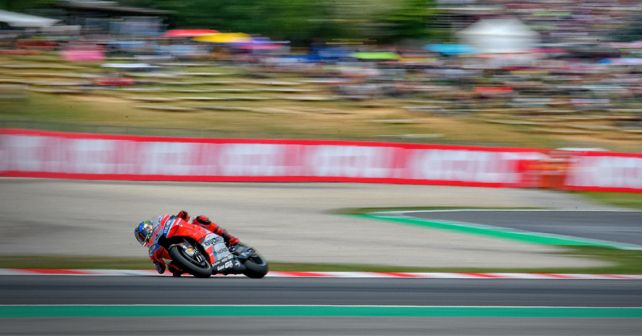 Jorge Lorenzo takes first ever pole position with Ducati in Catalunya, ahead of Marc Marquez and Andrea Dovizioso.

After taking his first win with Ducati in Mugello, Jorge Lorenzo has now taken his first ever pole position with the team. The Spaniard dominated the field throughout the practice sessions and is clearly the favourite to win the race tomorrow. However, he won’t have it easy since Repsol Honda’s Marc Marquez, and Ducati teammate, Andrea Dovizioso, will be starting alongside him on the front row.

Fresh from his maiden Ducati victory two weeks ago, Lorenzo now seems to have found his way around the Desmosedici. His race-pace looks phenomenal as he was consistently lapping in 1:39-1:40 even with used soft tyres. His teammate and last year’s winner here, Dovizioso, isn’t far behind, so he definitely fancies a chance to win here again. Marquez, on the other hand, is fast – as always – but he isn’t looking as consistent. There were far too many crashes and saves in the practice session. In fact, he couldn’t even make to Q2 directly and had to work his way up from Q1. Marquez may not have taken pole position on this occasion, but his save in FP4 is definitely worth a mention. It was just pure Marquez-style entertainment – losing the front end at over 170km/h with 61 degrees of lean and then saving the crash by digging his knee on the tarmac.

Yamaha’s Maverick Vinales will have a clear shot at the podium as well as he’s placed fourth on the grid and his race pace, on soft tyres, is quite impressive. Despite losing his seat at factory Suzuki from next year, Andrea Iannone is still charging along as he put his bike in the fifth spot. Danilo Petrucci of Pramac Ducati was sixth fastest. Leading the third row will be Valentino Rossi, ahead of Johann Zarco of Monster Tech 3 Yamaha and Tito Rabat of Avintia Ducati. LCR Honda’s Cal Crutchlow rounded out the top ten, despite having a fast crash in closing minutes of qualifying. Repsol Honda’s Dani Pedrosa and LCR Honda rookie Takaaki Nakagami were 11th and 12th, respectively.