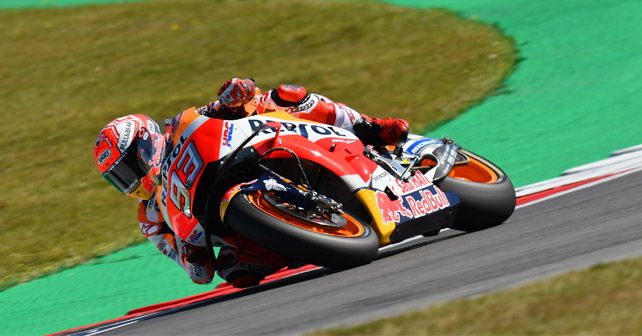 Championship leader Marc Marquez took his second pole position of the season at Assen, ahead of Cal Crutchlow and Valentino Rossi.

Marc Marquez has taken his second pole position of the season at the Assen GP. The Repsol Honda man has looked unbeatable so far over the race weekend, and if he continues the same tomorrow, he’ll be the favourite to win the race. Starting alongside Marquez will be LCR Honda’s Cal Crutchlow and last year’s winner here, Valentino Rossi (Movistar Yamaha).

As always the qualifying session was pretty tight among all the riders. Marquez, however, set the early pace as he went top in the first run of Q2. The second part of the 15-minute qualifying session saw all the riders swift to softer tyres to get the best one-lap pace. The man in form, Jorge Lorenzo of Ducati, was the first to knock Marquez’ best time to take provisional pole. However, in the dying moments of the qualifying, everyone was charging for their best final lap.  And, suffice it to say, most did manage to do that. However, once again, it was Marquez who took the top spot, taking pole-position from Crutchlow by just 0.041s.

The second row of the grid will have Ducati’s Andrea Dovizioso in fourth, ahead of Suzuki’s Alex Rins and Yamaha’s Maverick Vinales in fifth and sixth, respectively. Aprilia’s Aleix Espargaro was impressive again as he managed to put himself in the seventh position today. Tech 3 Yamaha’s Johann Zarco, who graduated from Q1, finished the session as eighth fastest. Suzuki’s Andrea Iannone will be starting from the ninth spot, while last race winner, Lorenzo, completed the top ten.

The top ten riders are separated by just 0.4s, suggesting that it’ll be a close race tomorrow. However, Marquez’ race pace looks the most impressive and it’ll interesting to see if anyone can take the fight to him on Sunday.