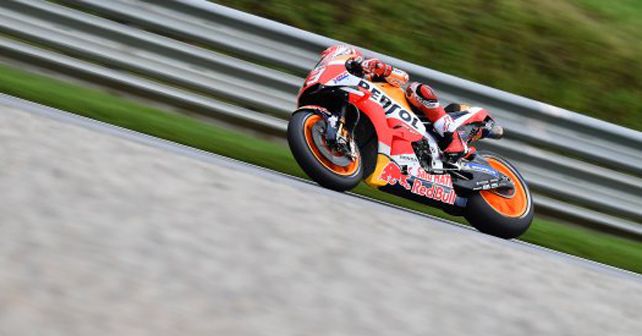 The qualifying session at the Red Bull Ring in Austria was a proper nail-biter, as Marc Marquez grabbed pole position by just 0.002 seconds from Andrea Dovizioso. Behind the duo, Jorge Lorenzo wasn’t too far, as he finished the session third fastest and was only 0.135s off Marquez’s pole lap.

Because of its long-straights and stop-go layout, the Red Bull Ring circuit favours Ducati's straight line speed, and this means that the Bolognese team returned to the track as the hot favourite. However, at the same time, there was no denying that if someone could take the fight against them, it’d be Marquez. And as expected, that’s exactly what he did. In the qualifying session, Marquez hammered a series of fast laps and was on provisional pole for almost the entire 15-minute duration. The factory Ducati riders, Dovizioso and Lorenzo, tried with all their might to grab the top spot, but despite being faster on the straights, they were always short of a tenth or so. There was no beating Marquez over a hot lap.

Behind the front row starters was Danilo Petrucci (Pramac Ducati) in fourth, followed by LCR Honda’s Cal Crutchlow (5th) and Johann Zarco (6th) of Monster Yamaha Tech 3. It wasn’t the perfect qualifying session for Zarco, but being the only Yamaha rider in top ten would be some consolation.

Row three will be led by Andrea Iannone (Suzuki) in 7th, ahead of Tito Rabat (Avintia Ducati) and Dani Pedrosa (Repsol Honda). Alex Rins made it in the top ten, while factory Yamahas struggled again with Maverick Vinales in 11th and Valentino Rossi in 14th.

If it stays dry tomorrow, expect the Austrian Grand Prix to be another duel between Marquez and Ducatis.