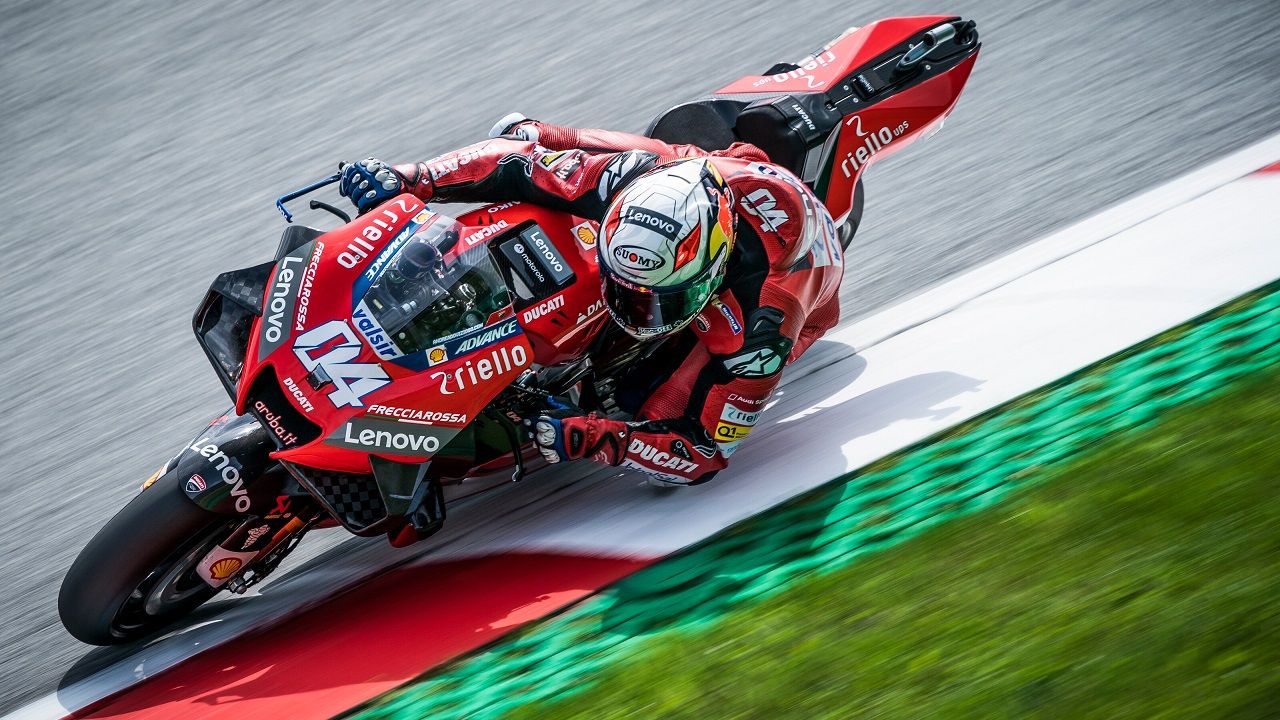 Despite calling it quits from the team next year, Dovizioso continues Ducati's winning streak at the Red Bull Ring by giving the team its fifth consecutive victory in Austrian GP.

A day after announcing his departure from Ducati in 2021, Andrea Dovizioso took his and team’s first victory of the year at the Red Bull Ring circuit in Austria. In what was a chaotic race that was red-flagged and restarted again, Dovizioso kept his cool to take the chequered flag ahead of Suzuki’s Joan Mir and Pramac Ducati’s Jack Miller.

The race was initially red-flagged, owing to a horrific crash between Johann Zarco & Franco Morbidelli, as their bikes got tangled at over 200mph! The impact was such that both the bikes were destroyed into pieces, but thankfully none of the riders suffered any severe injuries. And it wasn’t just the riders involved who were lucky – Valentino Rossi and Maverick Vinales of factory Yamaha were equally fortunate since Morbidelli’s crashing motorcycle missed the two riders by a whisker.

After the race was restarted, it was KTM’s Pol Esparagaro who started from pole, since he was leading the race before the proceedings came to halt. However, in the second start, he lost his touch and couldn’t regain his lead. Instead, Miller took the opportunity to lead the race from Dovizioso and the Suzuki duo of Alex Rins and Mir.

Like in Brno last week, P. Esparagaro once again made mistakes out of desperation and crashed but took Tech 3 KTM colleague Miguel Oliveira along to the gravel trap. Oliveira was looking all set to be in top 5, but it wasn’t to be.

At the front, Dovizioso steadily gained ground on Miller and then passed him without any challenge. However, he was coming under threat from Rins, as the Suzuki rider had very impressive race pace after the restart. Rins had snatched the second position from Miller, but he crashed during an attempt to pass Dovizioso. This opened the door for his teammate Mir to take his first-ever MotoGP podium. While Dovizioso opened a gap between himself and Miller, Mir was in no mood to settle for third. Miller and Mir took the battle for second place to the very last lap, with Mir finally edging past the Pramac Ducati rider in the last two corners to take the second spot.

Behind Miller, KTM’s Brad Binder took an impressive 4th place, ahead of Rossi. LCR Honda’s Takaaki Nakagami finished the race in 6th. Factory Ducati rider Danilo Petrucci was 7th, while championship leader Fabio Quartararo finished in 8th. That was a good recovery from the Petronas Yamaha rider, considering that he made a costly mistake and dropped down to 20th place before the session was red-flagged.

Tech 3 KTM rookie Iker Lecuona managed to finish in points in 9th, while Viñales, who started from pole position, yet again struggled in the race and finished 10th.

With a win today, Dovizioso has 56 points in the championship, meaning he has reduced Quartararo’s (67) lead to just 11 points after five rounds. Vinales is third with 48 points.