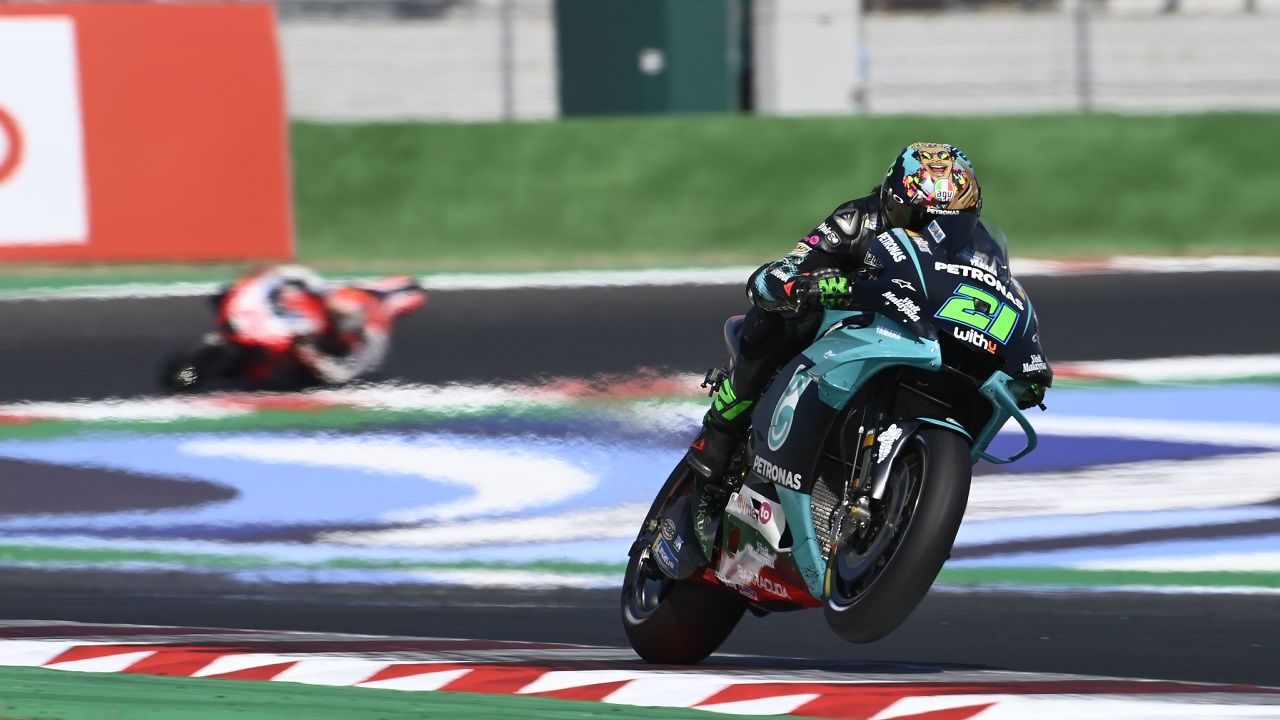 After a gap of two weeks, MotoGP returned to action at Misano for the San Marino Grand Prix. Like we’ve already witnessed in this season so far, it was another surprising race weekend, with Franco Morbidelli becoming the fourth first-time race winner in this season! The Petronas Yamaha rider led the race from lights-to-flag to take his maiden MotoGP win. Joining him on the podium was compatriot Francesco Bagnaia (Pramac Ducati) in second, while Suzuki’s Joan Mir finished in third.

With Yamaha riders locking the top 4 spots in qualifying, it was a given that a Yamaha will win the race. However, the bets were on Maverick Vinales, who started from pole position, and erstwhile championship leader Fabio Quartararo. As soon as the lights went out though, it was Morbidelli who led the race from Valentino Rossi (started from P4), as they were followed by Pramac Ducati’s Jack Miller. Vinales yet again had a terrible start, as he couldn’t capitalise on his pole position. The fact that he was the only rider to opt for a hard rear tyre also made life quite difficult for the factory Yamaha man. Quartararo, on the other hand, was stuck behind Vinales and was chased by Suzuki riders – Alex Rins and Mir.

At the front, Morbidelli and Rossi started to break away from the rest, with Miller not too far behind. The sight of the front runners disappearing resulted in Quartararo making a move on Vinales on lap 7. However, while the move was clean, the Frenchman made a mistake and crashed soon after overtaking Vinales, thereby, losing crucial championship points as well as the championship lead. He re-joined the race but retired after a couple of laps.

At the front, Morbidelli started gapping Rossi, but Miller in third was now struggling to keep up with the Yamahas ahead. Miller was soon passed by Rins and then by Bagnaia, as both the riders were hammering the fastest laps of the race. Rins managed to catch Rossi and so did Bagnaia. However, it was Bagnaia who passed Rossi first to claim the second spot.

Thanks to the battle behind, Morbidelli managed to break away from the pack and was around 3 seconds ahead. Bagnaia, too, managed to leave Rossi and Rins behind fighting with each other. Rossi tried everything to keep Rins at bay to claim his 200th career podium in front of his home crowd. While Rins looked stronger, he didn’t have an answer to Rossi’s defensive racing. At the same time, the scrap between Rins and Rossi brought Mir into the battle. In the last lap of the race, Mir jumped two places to take third – he overtook teammate Rins at Turn 1 and then made a hard but fair pass on Rossi at Turn 5 to snatch third place from him.

Morbidelli took the chequered flag, ahead of Bagnaia in second, with Mir close behind in third. Rossi finished fourth while Rins settled for fifth. Vinales finished the race in sixth, with Andrea Dovizioso (Ducati) in seventh. Despite a mediocre finish, Dovizioso is now leading the championship!

LCR Honda’s Takaaki Nakagami finished in eighth but was demoted by a place, as he was penalised for exceeding track limits. This meant Miller moved up a place from ninth. KTM’s Pol Espargaro rounded out the top ten.