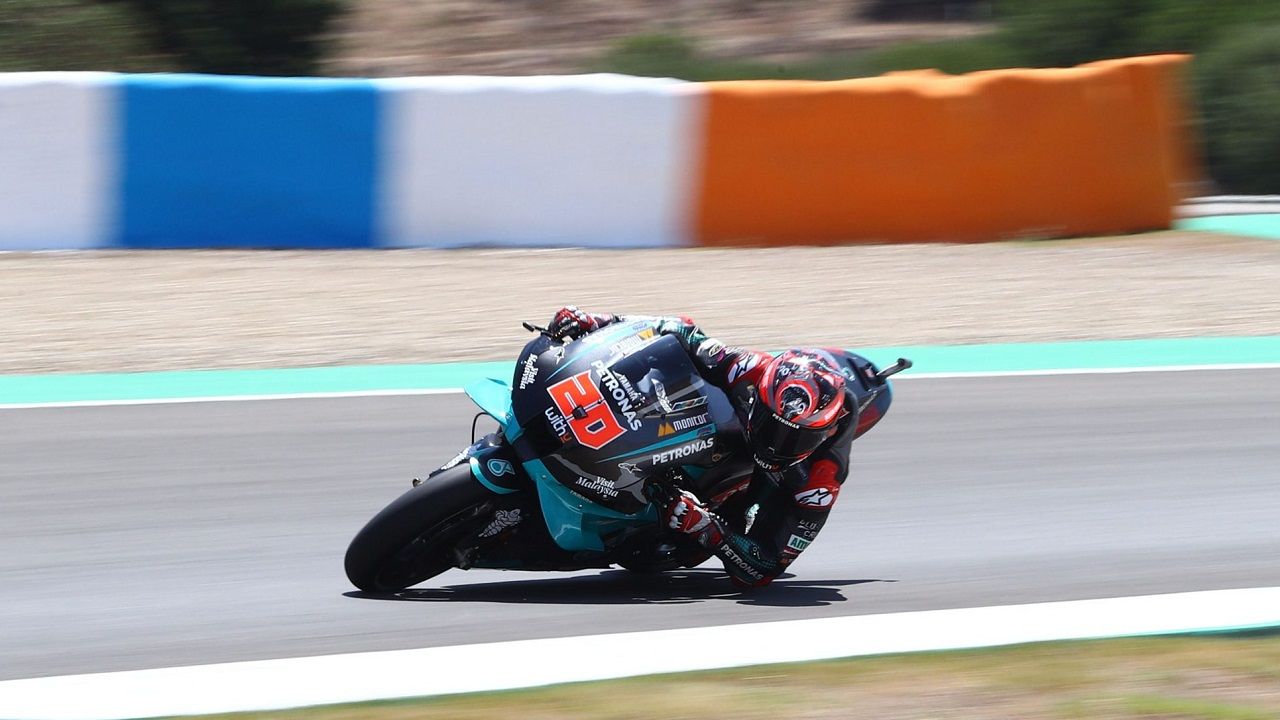 The second race of the 2020 season witnessed Yamaha make a clean sweep with a 1-2-3 finish, as Fabio Quartararo won the second race in succession, ahead of Maverick Vinales and Valentino Rossi.

The second round of MotoGP 2020 took place at the same venue - Jerez circuit in Spain – as last week, and the result was more or less similar, too. Fabio Quartararo of Petronas Yamaha took his second successive win, while factory Yamaha’s Maverick Vinales finished in second. There was a change for the third spot in the podium, as it went to Valentino Rossi, meaning it was a perfect 1-2-3 place finish for Yamaha.

The race weekend, however, kicked off with Marc Marquez's heroic return to the Jerez circuit on Thursday - two days after undergoing surgery on his right upper arm, which was fractured during a crash in the season-opening race last Sunday. Astonishingly, Marquez cleared the medical fitness test and participated in two free practice rounds on Saturday. He also did an out-lap in the qualifying, but didn't continue because of the pain due to the injury. Marquez withdrew from the race - this was the first time since his MotoGP debut in 2013 that he missed a race!

With Marquez out of contention, Quartararo again seized the opportunity – he was on pole position and won the race in a dominating manner over his Yamaha colleagues. He was nearly 7 seconds ahead of Vinales and Rossi during the race!

Vinales yet again failed to challenge Quartararo for a race win, and struggled during the race, thanks to extremely hot conditions at the track. However, Rossi looked much stronger and rode a stunning race to a third-place finish. He managed to keep Vinales at bay for the longest possible time, but couldn’t stop him from overtaking in the closing stages. Still, it was his first podium in 18 months, so he was quite cheered up about that.

Apart from the top-3, other riders had a tough day out. Only 13 riders out of 21 finished the race. Many suffered mechanical problems or crashed out. The most heart-breaking was the retirement of Pramac Ducati’s Pecco Bagnaia – he was running in second position, was well ahead of Rossi and Vinales, but his motorcycle developed a mechanical failure and it started spewing smoke, which brought an end to his brilliant run. Similarly, Petronas Yamaha’s Franco Morbidelli had the pace to pass Rossi, but his Yamaha lost the drive while he was lining up a move on the Doctor. Pramac Ducati’s Jack Miller also crashed out early in the race when he was fourth.

With the riders in front retiring, LCR Honda’s Takaaki Nakagami took a career-best fourth position. Suzuki’s Joan Mir managed to finish fifth, ahead of factory Ducati’s Andrea Dovizioso in sixth and factory KTM’s Pol Espargaro in seventh. Alex Marquez managed to finish in points and brought Repsol Honda some points in absence of his elder brother as he crossed the line in eighth. Reale Avintia’s Johann Zarco was ninth. Suzuki’s Alex Rins, who suffered a dislocated collarbone only last week, finished in tenth after braving pain and sweltering heat of Jerez.

The next race of the season will take place at Brno (Czech Republic) on August 9, 2020. Quartararo leads the championship with 50 points.