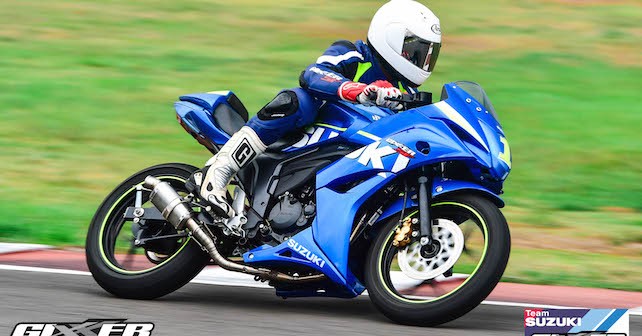 Suzuki Motorcycle India announced the launch of the single-make Gixxer Cup today, marking its entry into Indian motorsports in a series that will commence from next month.

The Japanese manufacturer follows the likes of TVS and Honda in establishing single-make cup series; which has been the route of choice for automotive companies in circuit racing so far on both two and four wheels with Volkswagen and Toyota also choosing this option over open competition in existing national racing championships for two and four wheelers.

The success of the Gixxer and its fully faired variant, the Suzuki Gixxer SF, will no doubt make the series an attractive one for professional riders who race in the one-make series due to the media interest generated by the presence of an automotive major. Not to mention the promise of stability and a large percentage of the costs being borne by Suzuki, which is crucial for independent teams and competitors who struggle to find sponsorship in India's corporate sphere that by and large ignores motorsports.

Suzuki's motorsports venture will commence from next month and will conclude in October. The Gixxer Cup will comprise of two classes - ‘Novice’ for beginners and ‘Open’ for more seasoned racers.

The grid size will be capped at 20 riders, with race-modified Gixxer SF motorcycles in action for five rounds of racing, which will be held as a support series to the Indian National Motorcycle Racing Championship at the Kari Motor Speedway in Coimbatore and the Madras Motor Race Track in Chennai. Suzuki will provide crew and pit personnel to support the riders.

In a press release issued by Suzuki India, its executive vice president Atul Gupta stated that the company's intention was to provide "an affordable platform" for racing enthusiasts in the country.

The Gixxer Cup is sanctioned by the Federation of Motor Sport Clubs of India and will be organized by the Madras Motor Sports Club.