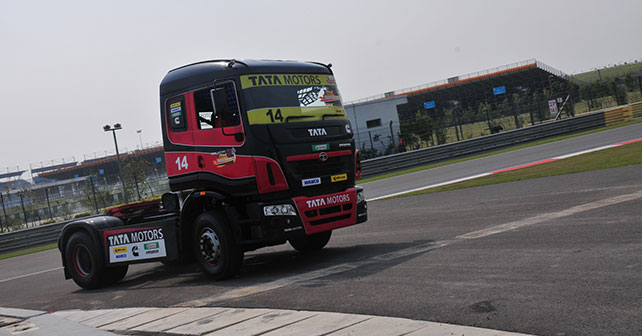 Just over two weeks ahead of its inaugural round, Tata Motors gave its T1 Prima Truck Racing machine a track run at the Buddh International Formula 1 circuit near Greater Noida today.

Twelve of the 7,000 kilogram, 380 horsepower Tata T1 Prima trucks will race at the circuit on the March 22-23 weekend along with one-make motorcycle races.

Tata Motors has been promoting the series as its initiative to bring the sport of truck racing to India, although there will not be a single Indian driver behind the wheel of any of the trucks come raceday.

The drivers have been selected by Tata Motors' British technical consultant from the British Truck Racing championship.

The concept of the truck racing championship had been unveiled by Tata in January at Pragati Maidan, prior to this year's Auto Expo.

The track run that took place with some taxi rides for the media was conducted by one of Tata's test drivers from its Jamshedpur plant where the trucks have been developed and tested ahead of their racing debuts.

The truck will race on tyres developed specifically for the series by JK Tyre.

Truck racing is a sport that was introduced in 1979 as an added attraction to the faster and more serious racing championships for cars and motorcycles.

A Tata Motors spokesperson at the event claimed that the series would allow the automotive company to try out some new technologies and help promote the T1 Prima truck among the general public.