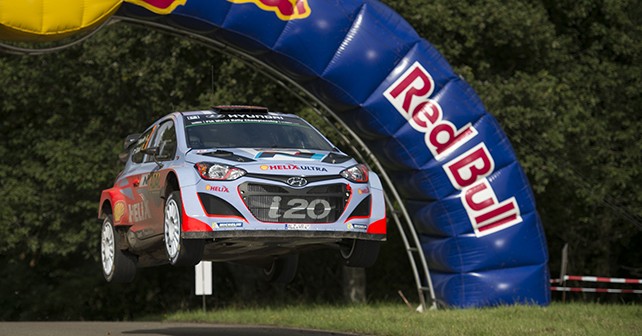 A change of pace every now and again can be a good thing. But not necessarily for a World Rally Championship (WRC) driver going into a tricky tarmac rally stage.

Finland's Jari-Matti Latvala found this out on Sunday as he (literally) came crashing down from the high of winning his home event of Rally Finland to retiring on the final day of Rally Deutschland while leading by almost a minute from Peugeot's Kris Meeke who also crashed out.

Latvala's crash ultimately came down to changing his pace note for a stage at the last minute and going into a corner too fast and taking the scenic route to retirement.

The almost baffling inability of both men to capitalize on WRC championship leader Sebastien Ogier's two crashes that put him out of contention of any points meant that the works Hyundai Rally Team scored a 1-2 finish with young Belgian hot shot Thierry Neuville and Dani Sordo taking the top two steps on the podium.

With Ogier and Latvala both out, it was left to Andreas Mikklesen to salvage a podium finish for the works Volkswagen team in his Polo WRC.

Neuville's win in the i20 rally car was the first for Hyundai in the WRC and probably a deserving reward for a squad that came back to rallying's top flight this year determined to be a major force.

Ultimately, however, the win amounts to little more than a special send-off to the i20 WRC as Hyundai is set to use the new production spec car as the base for it's championship challenger.

What could - and probably should - have been just a 16 point deficit to Ogier with four rounds of the WRC season left, remains a 44 point gap between the Frenchman and his Finnish teammate.

It is unlikely that Latvala will ever get such a chance again this season. The championship moves back to gravel in Australia on the September 11-14 weekend at Coffs Coast, New South Wales.

The Finn will now have to blank out his championship blip in Germany and try to carry forward his positive result in Rally Finland where he beat Ogier on gravel in a straight fight.

But knowing that the defending champion can now theoretically coast to the end of the season is likely to stir up feelings of regret over the changed pace note.