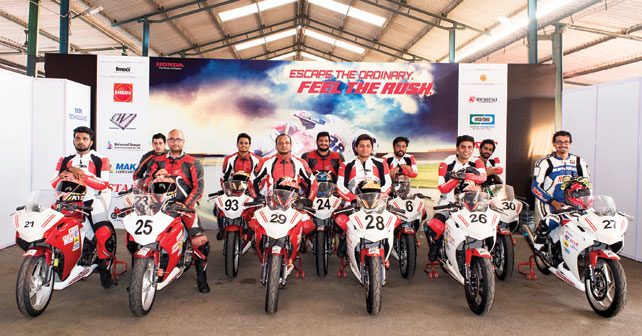 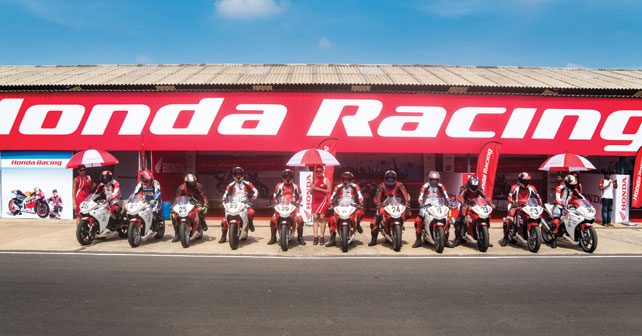 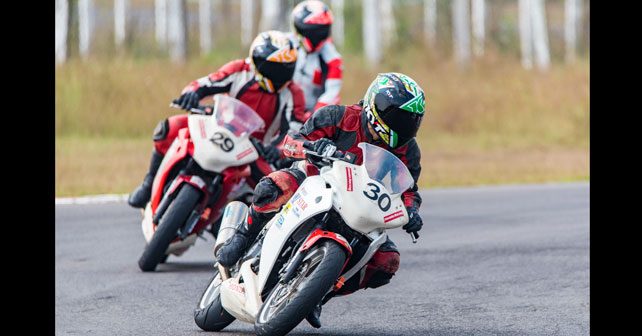 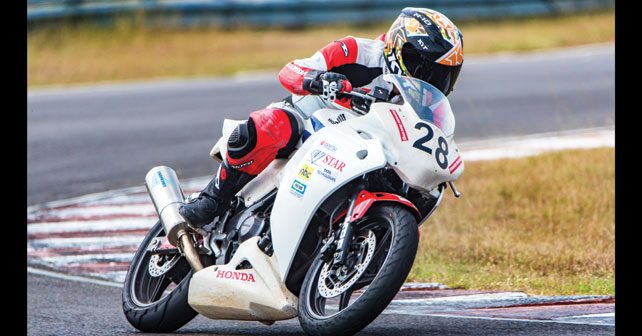 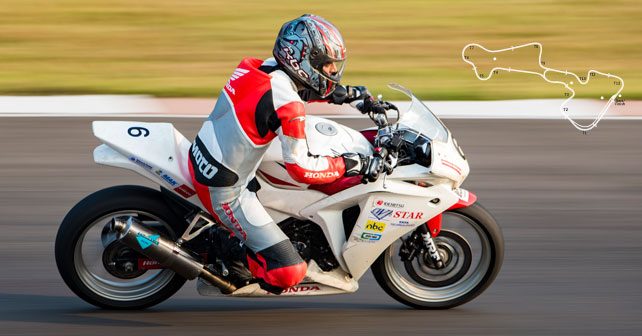 Shivank has just returned after his first race experience at the Honda One-Make Championship, and he’s got a great story to tell...

“Come back in one piece,” that’s what friends and well-wishers said when I left for Chennai in order to compete in a “motorcycle race.” Good advice I suppose, since it’s well understood that motorsports, in general, is considered dangerous. Adding another dimension, like a motorcycle, to it only cements the aforementioned belief. Simply put, a majority of people view motorcycle racing as a bone-breaking exercise – which is purely the purview of individuals who have completely taken leave of their senses.

Ever since I started following motorcycle racing though, I have always wanted to get closer to the action somehow. Little did I know, however, that I’d end up being part of the action in the first go! Between February 19 and 21, 2016, Honda organised the final rounds of its national one-make championship. Amidst the preparations, Honda asked a select few motoring journalists to tag along for the event and have a go around the racetrack on its race-prepped CBR250R. Mind you, this wasn’t any ordinary ‘experiential ride,’ where one simply straddles her or himself onto a motorcycle, takes a 3-4 lap tour, puts a knee-down (or, pretends to anyway), and then flies back home thinking they’ve got motorcycle racing covered. Nope, this was (thankfully) nothing like that. It was a full three day race event for the media, split over three sessions – training, qualifying and racing.

Day 1 kicked off with training session under the supervision of Mr Ramji Govindrajan, Director of Ten10 Racing, and ex-Moto3 racer, Sarath Kumar. It comprised four sessions in total, with each having a 15-20 minute classroom interaction followed by a track time of 30 minutes. That meant around 2 hours of track time in a day. Awesome!

Ramji’s way of delivering theoretical lessons is full of insights as well as light-hearted jokes. Sarath, meanwhile, was there to explain the finer nuances of motorcycle racing while also helping us get acquainted with the bike that we’d be racing – a race-prepped Honda CBR250R. This purpose-built racer has a recalibrated ECU with switchable engine maps, pit-speed limiter, stiffened up dampers filled with spacers and thicker grade fork oil, a new Endurance mono-shock setup at the rear, a free-flowing exhaust, a quick gear-upshifter, higher set foot-pegs and a set of race compound (read – extra soft) tyres that stick to the tarmac like they’re made out of glue, and not rubber.

After having gotten inside our race-suits, which was quite a task, we reported to the press room where Ramji talked us through the techniques of track-riding. “Riding on the track is an entirely different ballgame as compared to riding on the road. There, you’re constantly thinking about averting objects while trying to go fast. On the track, you don’t have any distractions, you are just figuring out ways to ride as fast as you can.”

Ramji also pointed out that every component on the motorcycle is there to make you go faster, including the brakes. In the same vein, he also tells us that rear brakes are useless on a racing motorcycle. “You can chuck them away, and it won’t make any difference.” But, one thing that he keeps pressing on repeatedly is that every rider must define their braking points carefully.

First job at hand, then, is to find an imaginary braking marker for each corner. Following that, you’ve to accurately decide the turn-in point. Next is counter-steering (initiating a turn by momentarily pushing the handlebar in the direction opposite to the direction of the desired corner). Before going into the corner, you’ve got to not only prepare the motorcycle but yourself as well. And getting the body position correct is one of the trickiest bits of this trade.

Ideally, you should be taking a corner with your inside knee and elbow pointing downwards with half your butt cheek hanging off the saddle. The inside shoulder should point towards the direction of the corner, while your head has to be tucked in a position as if you’re ‘kissing’ the inside rear view mirror. Advantages? When the rider hangs out of the bike – in the correct manner – the lean angle of the motorcycle reduces significantly while carrying the same amount of speed through the corner. This means that the tyres have a larger contact patch – thereby, offering more grip and consequently more room for error. As a thumb rule, always look where you want to go – setting your sight for the apex first and then moving on to the exit line as you open the throttle back again.

Easier said than done though. On the track, I’m not sure if I managed to perfect that sequence even once. In practice it’s really difficult to keep track of all this when you’re riding a motorcycle that can crack speeds in excess of 160km/h on the short-straights of the MMRT. That said, at the end of the day, I knew I was getting more-and-more confident all the time – and also feeling considerably faster lap-after-lap.

Saturday was the day for qualifying practice – not just for us, but for all other races of the Honda One Make series. This also included female participants competing in a separate category altogether, making it the country’s first ever ladies-only race. Apart from this, the final rounds of the 2015 National Motorcycle Championship were also being held on the same weekend. This meant we had limited track time that day – a 20-minute practice session, followed by a 10-minute qualifying. The practice session helped us warm up for the qualifiers, although some lost riding gear meant three of the riders, including me, had to waste nearly 5 minutes of our qualifying time sitting in the pits. When we finally went out, we only had one hot lap to put in our best time. Unsurprisingly, I was almost 20 seconds off the pace of the fastest rider – managing to get the 8th slot of the 11 on the grid for the race.

Race day comprised of two races of 4 laps each for the media. When the lights went off for the first race, I managed to recover two spots just after setting off. But that joyous moment ended prematurely because just before T2 I skipped a gear, allowing the rest of the grid to ride past me. For the remaining part of the race I struggled to chase the pack because I kept on making too many mistakes – such as running too hot into corners, missing braking points, etc. Three riders crashed out during the full course of the race, so I ended up finishing in the same spot in which I started.

After the first race, I felt quite discouraged since I struggled to go quicker than others. A quick look at the timesheets suggested that my best lap was around 14 seconds slower than the winner’s best lap. On the upside, my lap times were about 10 seconds faster than qualifying, which was news that provided a little bit of comfort.

I wasn’t expecting much in the second race because I thought I was the slowest rider on the grid. But to my surprise, it turned to be a lot better than I had imagined. At the start, I managed to get a near-perfect launch that saw me move up to 4th position before T2. I don’t know how, but I managed to hold on to my position for about two laps. The leading trio gradually started to pull away, and credit where it’s due, they were simply too quick and far more skilled than I. At the start of the third lap, I was overtaken by a rider on the main straight. I managed to stick to his tail for two more corners before pulling an overzealous overtaking move just after the tricky kink on the back straight. However, it didn’t go as planned. I ran out of track, but, thankfully, not out of luck – as I ploughed on the grass at a speed of around 130-140km/h! And so that was the end of race 2 as well. I finished dead last.

The race results were disappointing for sure, but the final stint on the track helped me win back some confidence. Of course, I wasn’t going to smash any lap records out there – but I do feel that I had the pace to run with the mid-pack.

Riding a motorcycle is a never-ending learning curve, and quite an intriguing one at that. For me, the training session at the track was the key highlight of the entire program. But as the adage goes, “the more you learn, the less you know,” and this experience has only made me more curious about the art of riding, and racing. Also, as a matter of fact, it helped me improve immensely as a rider on the road. I ride a lot more calmly now because riding a bike – no matter how powerful it is – on public roads can’t give you the same high as riding a race-spec motorcycle flat-out around a racetrack. And since I’ve come back home intact, I’m sure I’ll be allowed to go back on a track again without any raised eyebrows or silly questions asked… 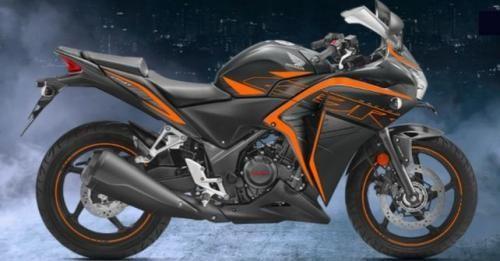