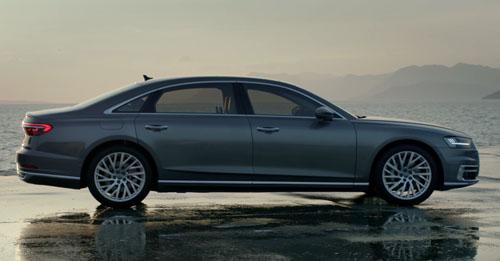 The previous-generation Audi A8 had disappeared from the scene for a bit, but it's now back in the form of the fourth-generation model. It's an impressive executive sedan that brings with it technology and convenience that is hard to ignore. It is solidly built and comes lavishly equipped with the latest features like air suspension, heated back seats, a high-definition touchscreen, a removable tablet control system and internet connectivity among a host of other features. Aesthetically, the car definitely portrays the all-business appeal of a luxury sedan.

What Audi has to offer is easily one of the most technologically-advanced cars money can buy today. Power comes from a large capacity '55 TFSI' petrol engine for now, with no diesel being offered yet. It also comes with Quattro all-wheel-drive and a Tiptronic automatic gearbox. Also, it boasts of self-parking and adaptive cruise control. The Audi A8 L price puts it bang in the executive luxury sedan segment with the Mercedes S-Class, BMW 7-Series, Lexus LS 500h and the Jaguar XJ L.

The Audi A8 L new model is a proper limousine to look at. At the front, it boasts of the signature Bulgarian Beard single-frame chrome grille. Even the fog lamps have chrome borders. It sports large headlamps and a vast bonnet. Along the sides, it has chrome on the lower half of the doors and there's even a character line visible, running the length of the front and rear doors. Also, note the five-spoke 19-inch wheels. At the rear too, it's the business-as-usual look with those large OLED tail lamps and that light bar running across the boot. We also liked the well moulded rear bumper which gets the chrome treatment too.

The cabin of the A8 is beautifully crafted - right from the electrically-adjustable Valcona leather seats to the dashboard that gets a pair of touchscreens on the centre console. These come to life the moment you open the car's doors. The seats are extremely comfortable and long distances should never be a bother. It also gets a relaxation seat and a rear left seat with a feet-warming function.

You can also write commands on the lower screen of the dashboard. In terms of comfort, the A8 is nothing short of luxurious. Everything is dripping with class and sophistication, and the dashboard, thankfully, isn't cluttered with too many buttons. Thanks to the longer wheelbase, the A8 L feels far roomier at the back than before, but because of the transmission tunnel, it's best used as a four-seater. Boot space, at 510-litres, is very good.

The Audi A8 L is powered by a 3.0-litre, V6 engine that produces 335bhp and 500Nm of torque. It also gets a mild-hybrid 48V system. Paired to the engine is an 8-speed torque-converter automatic transmission with power being sent to all four wheels. Power delivery is smooth and acceleration is linear, while refinement levels are really good. Dynamically, the A8 L proves to be really good, as the steering and suspension become very relaxing, particularly in 'Comfort' mode. It tackles potholes with aplomb, and the A8 feels agile thanks to the optional rear-wheel steering. The steering feels nice and light, making driving in traffic a boon. High-speed stability too is very impressive. The Audi A8 L on-road price, however, will be out of reach for many.

While Audi has not revealed the official fuel efficiency figure for the A8 L, expect it to deliver around 9-10km/l.

Reports suggest that February 2020 is all set to be the month that'll witness the much-delayed launch of the new, fourth-gen A8 L. While the fourth-gen may be new for India, it's worth mentioning....

What is the current on-road price of Audi A8 L?

What is the price of the top variant of Audi A8 L?

Which year did Audi introduce the A8 L in India?

What are the top competitors of Audi A8 L?

The Audi A8 L goes up against the Mercedes-Benz S-Class and BMW 8 Series in the Indian market.

Audi A8 L Price in Nearby Cities