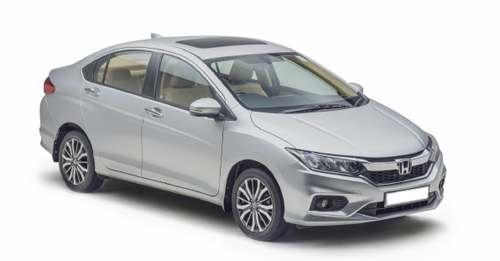 It might have started out as a hatchback in Japan, but when it made its debut in India in 1998, it was launched as a mid-sized sedan. Being sleek, low-slung and Japanese, the Honda City was quite a hit among car enthusiasts. It's currently in its sixth-generation form, after these twenty years of success, and still manages to deliver the goods.

There are quite a handful of revisions in the Honda City new model, that include a re-designed front fascia, a new bumper with some cuts and slashes added for pizzazz. Up-front, you'll find a thick chrome bar with mesh for the radiator grille, larger LED headlamps that now feature LED DRL strips and 16-inch or 15-inch diamond-cut alloy wheels, based on the variant that's being opted for. At the rear, there's a subtle boot-lip spoiler, while the tail lamps boast of new clusters. An additional brake light can also be had on the top-of-the-line ZX variant.

The 2018 Honda City variants are as follows: S, SV, SV Edge Edition, V, V CVT, VX, VX CVT, ZX CVT, and Anniversary Edition available as petrol models, while the diesel models come as SV, SV Edge Edition, V, VX, ZX and the Anniversary Edition. Features include automatic headlamps and wipers, adjustable rear headrests, an auto-dimming rear-view mirror, a tilt and telescopically-adjustable steering, and one-touch operation for the sunroof, among other things. On the safety front, it comes equipped with six airbags on the top variants, while a rear defogger comes standard across all variants.

There's a modern and premium feel to the City's cabin – in conjunction to the high-set Honda City price. The dashboard sports a new design, and comes with a new 7-inch touchscreen infotainment system featuring satellite navigation and Mirror Link connectivity, which lets your smart phone give it Wi-Fi connectivity for various functions - that includes browsing your e-mails. Space and comfort levels remain unchanged, the dimensions remain the same - and hence, the cabin continues to brim with luxury in abundance.

The Honda City is powered by a 1.5-litre, four-cylinder petrol and diesel engine. The petrol motor makes 117bhp of power and 145Nm of torque, while the diesel produces 99bhp of power and 200Nm of torque. While the former is allied to a either a CVT or 5-speed manual, the latter is mated only to a 6-speed manual. The refinement of the petrol engine is flawless, but it's the diesel motor that's the more eager and enthusiastic of the two. All in all, it’s the petrol model – for a lesser Honda City on-road price, of course – that deserves your attention. Ride quality continues to impress in urban conditions, tacking the rough stuff with aplomb.