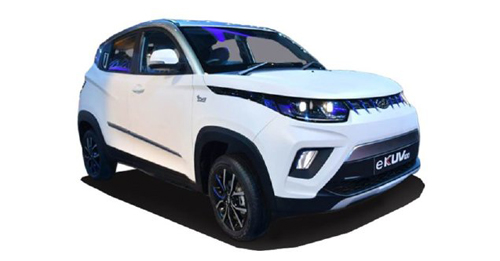 At this year’s Auto Expo, it was clear that Mahindra’s focus was on electric vehicles. Apart from showcasing the e2o NXT and an electric bus, the company also took the wraps off an electrically powered KUV100. Design-wise, the eKUV looks identical to the petrol-powered counterpart. In fact, the only visual differentiation between the two models is the badge. The story is somewhat identical in the interior too, expect for the absence of the gear lever on the electric variant. This, in fact, gives the eKUV the capability to be the 6-seater it first set out to be. Mahindra has fitted the eKUV with a lot of new-age tech, including remote diagnostics, interior pre-cooling and location tracking. Customers can even keep a track of their driving pattern and battery range.

At the heart of the eKUV will be the same motor that powers the eVerito. The 30kW powerhouse gives it a claimed driving range of 140 kilometres. The Nashik-based car maker has also brought in a quick charging feature that can charge up to 80 per cent of the battery in an hour. Mahindra may also offer another powertrain during the launch of the eKUV.

Fully developed by Mahindra Electric, the company’s electric car division, the eKUV is sure to be priced higher than the gasoline powered KUV.

Dr Pawan Goenka (MD - Mahindra & Mahindra) today announced that the much-awaited and much-delayed electric version of the KUV100 hatchback (shown at the 2018 Auto Expo as the eKUV100) is set to....