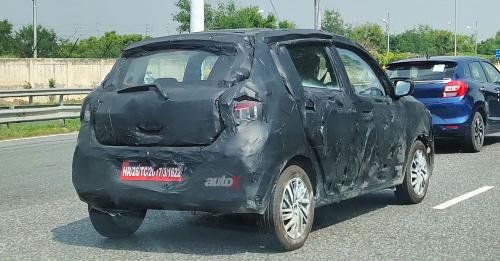 Maruti Suzuki has been extensively testing the New Celerio over the last couple of months. The hatchback has been in the Indian market since 2014, and, over time, it has been updated once with a facelift in 2017. It is, without a doubt, an ageing model now and Maruti Suzuki is soon expected to push a generational upgrade to the small hatchback.

We haven’t had a first look at the hatchback sans camouflage, but one thing that’s clear from the spy shots is that the Celerio is going to grow in dimensions, making it roomier than ever on the inside. It is also expected to be built around the brand’s Heartect platform, which currently underpins most of the new-age Maruti Suzuki cars.

It’s also expected to receive an equipment upgrade. The new-gen Celerio will get Maruti Suzuki’s Smartplay infotainment system on the higher-end trims. The seats are also expected to have better cushioning than before. Moreover, the 1.0-litre three-cylinder motor will continue to propel under the hood of the new Celerio, Maruti Suzuki might introduce its 1.2-litre four-cylinder petrol engine in the higher trims. Expect the gearbox options to remain the same.

The new-gen Maruti Suzuki Celerio, when it arrives in the Indian market in the coming months, is going to be a bit dearer than the ongoing model. Upon its arrival, it’ll go up against the Tata Tiago and Hyundai Santro.

The Maruti Suzuki Celerio is the car that single-handedly changed the perception and affordability of automatic cars in India. It was the first passenger car to feature the Automated Manual....