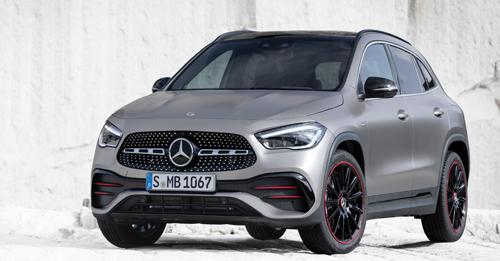 Mercedes-Benz showcased its next-generation entry-level SUV, the GLA, at the Auto Expo 2020. The new SUV will be launched later this year.

The new GLA looks all grown up and more rugged than the current model, as it’s taller by 104mm, and now has a stretched wheelbase by 30mm. This translates into more headroom in the first row and improved legroom for the rear passengers, even though the new SUV is 14mm shorter than its predecessor. Mercedes-Benz has purposely shortened the new GLA’s front and rear overhangs to make it a bit more comfortable off-roader. It also now comes with protective cladding all around.

The GLA will be available in both front-wheel and all-wheel drive – or as Mercedes-Benz calls it, the 4MATIC system. The latter will have the Off-Road Engineering Package, which features an additional driving programme that will adapt to the all-wheel-drive system, the power delivery of the engine, and the ABS intervention control. It can be activated by switching on DYNAMIC SELECT. The 4MATIC GLA version will also come with a downhill driving assist function and an off-road animation in the media display, along with MULTIBEAM LED headlamps, a special function that throws additional light on obstacles on challenging terrains in dark. It also switches on the cornering light continuously up to 50km/h.

The GLA’s stand out feature has to be the all-digital cockpit single display that doubles as an instrument panel and a touchscreen infotainment system. It will also come with MBUX, which keeps you connected to the SUV and offers many remote-controlled features like navigation with augmented reality, voice control activated with the prompt ‘Hey Mercedes’, and vehicle service checks. All this can be experienced because of an embedded SIM in the GLA.

Coming to the engine options, the new GLA will continue to be powered by the 2-litre petrol and diesel motor, which will now be compliant with the stringent BS-VI emission standards, of course.