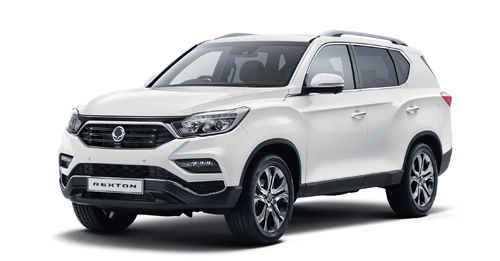 Mahindra brought the SsangYong Rexton to India in 2012 but it didn’t shake up the sales charts. SsangYong has recently unveiled the new Rexton G4 at the 2017 Seoul Motor Show and the car is expected to make its way to Indian shores in the first quarter of 2018. The new Rexton G4 sports a new ‘dignified motion’ design language. The SUV now sports a black stretched hexagonal shaped grille that is accompanied by projector headlamps with Daytime Running Lights on either side. The new Rexton also comes with cornering lamps and large 20-inch alloy wheels. At 4,850mm in length and 1,960mm in width it is smaller in dimensions than the Ford Endeavour, but it sure is larger than its predecessor and oven the Toyota Fortuner. Needless to say, the larger dimensions will result in more space on the inside. In terms of features too, the

Rexton G4 is expected to be up-to-date with the latest trends. It will come fitted with a 9.2-inch touchscreen infotainment with Apple CarPlay and Android Auto, a 360-degree camera, cooled seats, smart tailgate and more. Hiding under the hood of the Rexton G4 is a 2.2-litre turbo diesel that makes 183bhp and 420Nm. This engine comes mated to a 7-speed autobox. Internationally, there is also a petrol motor on offer, but it is unlikely that it will come to India, at least not at the time of launch. Mahindra is likely to launch the SsangYong Rexton G4 at the 2018 Auto Expo. When launched, expect it to be priced considerably lower than its rivals.