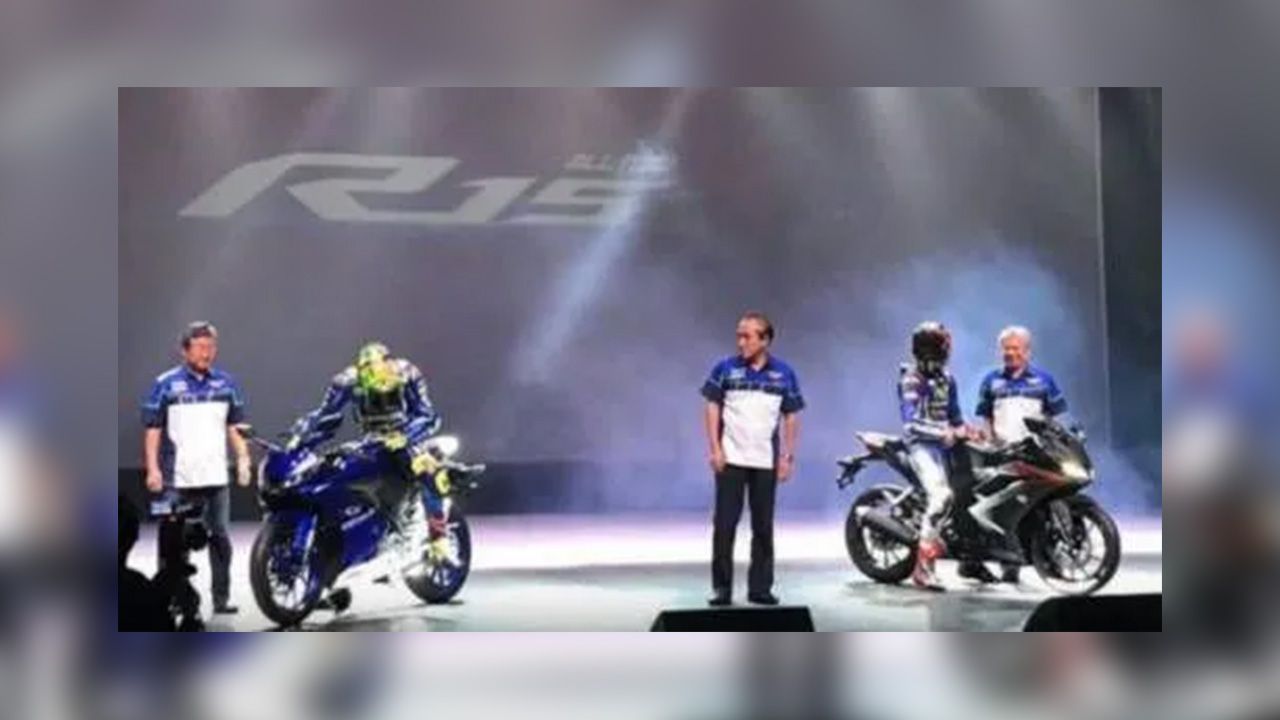 Yamaha first launched the YZF-R15 in India in 2008 and it quickly made it into the hearts of enthusiasts. A few years later, the fully-faired offering received an update in the form of the YZF-R15 v2.0, but since then the bike hasn’t received any updates. The introduction of performance focused motorcycles like the KTM RC range and the Bajaj Pulsar RS200 has made things somewhat difficult for the R15 v2.0. While the tuning fork brand had been playing the waiting game so far, they have now taken the wraps off the all-new Yamaha YZF-R15 v3.0 in Indonesia. Yamaha’s MotoGP riders for 2017 – Valentino Rossi and Maverick Vinales unveiled the new motorcycle to the press and public at a grand event earlier today.

Ensuring that the new YZF-R15 v3.0 is in line with the rest of the line-up, Yamaha has completely redesigned it. It now looks sharper than ever before thanks to the sleek headlights, chiselled tank, split seat and the LED taillamp. At the official unveil, Yamaha showcased two colours – the traditional Yamaha Blue-White combination and an all-black just like we have seen on the YZF-R3. The new R15 ditches the semi-digital instrument cluster in place of an all-digital one.

Hiding behind the fairing, is an all-new 155.1cc single-pot liquid-cooled unit that churns out 19bhp of max power at 10,000rpm and 14.7Nm of peak torque at 8,500rpm. This unit comes mated to a 6-speed transmission that comes paired with a slipper clutch. The new R15 continues to be based on the Deltabox frame, same as its predecessor. Suspension duties are performed by Upside down forks up front and a monoshock setup at the back. The Japanese bike maker claims that all of this has helped endow the new R15 with great handling dynamics. At 1,990mm in length, 725mm wide and 1,135mm in height, the upcoming R15 is easily larger than the current-gen model. Despite the larger size and the additional features, at 137kg, the new R15 is just 1Kg heavier than the v2.0 on sale in India currently. It sports 100 section tyres up front and 140 section rubber at the back, both 17-inchers. The model that was unveiled in Indonesia wasn’t equipped with ABS but with the new regulations in India, expect it to come fitted with ABS.

Yamaha will first launch the new V15 in the South-East Asian market and then bring it to Indian shores towards the latter half of the year. When the new 2017 Yamaha YZF-R15 gets launched in India expect it to be priced around the Rs 1.5 lakh mark.