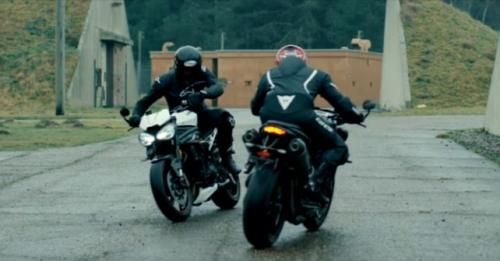 Triumph has almost fully revealed the upcoming 2018 Speed Triple RS in a long teaser video on its official Youtube channel.

The teaser video features Carl Fogarty, a multi-time World Superbikes Champion, and Gary Johnson, a two-time Isle of Man TT winner. While Triumph has not revealed anything officially, the video shows the Speed Triple RS in all its glory, revealing some of its key features.

The RS looks identical to the present-generation Speed Triple, which was revealed in 2016. Now in its 2018 RS avatar, the Speed is seen sporting dual Arrow exhausts for a sportier, louder exhaust note. There is also a new colour TFT instrument cluster, which is exactly what like one on the new Street Triple RS and 2018 Tigers.

Triumph already offers premium Ohlins NIX30 forks and TTX36 rear shock on the current Speed Triple R variant, making it quite likely for the RS variant to gain the semi-active ‘T-SAS’ suspension from the 2018 Tiger 1200. Furthermore, we also expect Triumph to give the lower S and R variants of the Speed Triple an incremental update for the 2018 model year.

The RS will continue to draw its power from the current Speed Triple’s 1,050cc, 3-cylinder motor, however, power output is expected to go north of 137bhp, which is what the current model pumps, making RS the swiftest Speed Triple to ever launch.

The current-generation Speed Triple, sadly, has not made it to India as yet. Triumph India continues to sell the older model of the litre-class street fighter. However, rumours suggest that Triumph might finally launch the new Speed Triple in India after the 2018 models debut globally.

You can watch Triumph's official teaser video below.