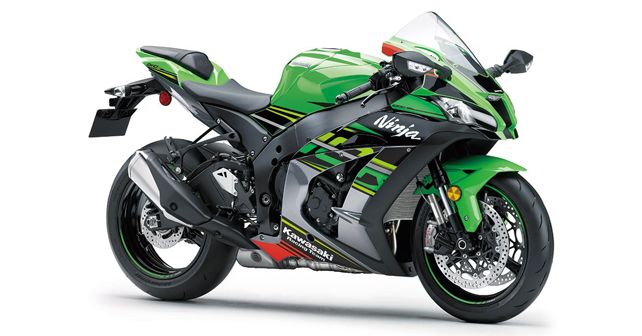 With a handful of upgrades, the 2019 version of Kawasaki's litre-class supersport becomes a bit expensive over the outgoing model.

India Kawasaki Motor (IKM) started local assembly of the Ninja ZX-10R last year when it launched its 2018 iteration here. This resulted in a big price drop (of ₹ 6 lakh) as the CKD model was priced at ₹ 12.8 lakh. Now though, the 2019 Ninja ZX-10R has been launched here with a handful of upgrades and it now costs ₹ 13.99 lakh (Ex-showroom, Delhi). So, what do you get for the extra ₹ 1.2 lakh? Well, here's the lowdown.

The most crucial upgrade comes in the form of engine modification as the motor on the 2019 Ninja ZX-10R gets a new Diamond-Carbon coated finger-follower valve actuation system which replaces the previous tappet-style setup. Previously available only on the ZX-10RR, the ZX-10R now also gets a higher-spec cylinder head which provides clearance to accommodate race-spec high-lift camshafts. To add to the style quotient, the cylinder head has been painted red. These mechanical upgrades have also bumped up the power figures. While the 998cc four-stroke in-line four-cylinder motor used to pump out 197bhp, the liquid-cooled unit now generates 200bhp. The torque figure too sees a bit of an improvement, which is now at 114.9Nm. In addition to the motor upgrades, the 2019 ZX-10R also gets a bi-directional Kawasaki Quick Shifter (KQS) as standard, which was also earlier available only on the higher SE and RR versions.

Customers who booked their bike in the pre-booking period can expect deliveries to begin by mid-June 2019.