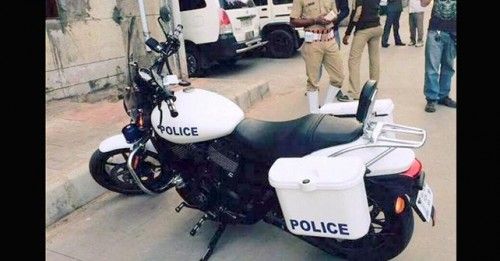 Gujarat Police gets Harley-Davidson SuperLow and Street 750 as a part of their fleet.

The latest additions to the fleet owned by Gujarat Police is not of some Toyotas or latest Pulsars. The state police recently got two new motorcycles added to their portfolio of vehicles – the Harley-Davidson SuperLow and Street 750.

These high-end motorcycles will be used in the convoys escorting VIPs, and not the way we have been seeing in Hollywood movies from decades. This development has happened ahead of the Vibrant Gujarat Summit 2015 which is going to be held at Gandhinagar in January 2015.

Harley-Davidson motorcycles are used across the globe by various police departments, India being the latest addition to the list of the countries. As of now, Gujarat is the only state in India that will be using these power-packed motorcycles, and the number of motorcycles Gujarat police has ordered are still unknown, but it is rumoured that the Gujarat Police will buy 20 superbikes out of which seven would be Harleys. Three other manufacturers – Triumph, BMW and Hyosung – are also being considered by the state police to expand their portfolio.

The Street 750 is the cheapest Harley-Davidson available in India with a price tag of Rs. 4.1 lakhs (ex-showroom, Delhi), while the SuperLow is priced at Rs. 5.71 lakhs (ex-showroom, Delhi). While the Harley Davidson Street 750 is entirely made in India and is powered by the a liquid-cooled V-Twin engine developing 47bhp and 60Nm, the SuperLow, on the other hand, gets an air-cooled 883cc engine that puts out about 50bhp and 69Nm of torque.