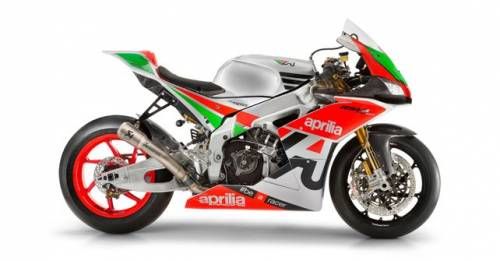 The Aprilia RSV4 FW-GP is the closest thing to the firm's MotoGP prototype, featuring pneumatic valves and developing over 250 horsepower!

Customer versions of racing motorcycles aren’t something new. In 2008, Ducati revealed the Desmosedici RR, claiming it to be the first true MotoGP replica for customers. More recently, Honda launched the RCV213V-S - which is heavily based on the company’s championship winning RC213V MotoGP machine - for just over 200 lucky as well as extremely wealthy buyers. Now, though, it’s Aprilia’s turn to woo this class of buyers.  And, unsurprisingly, the Italian firm has gone all guns blazing with its new race ready offerings!

Aprilia’s Factory Works division has come up with a special, high-performance range of its racing motorcycles, which will be available for sale. And it’s not just one motorcycle that we’re talking about here – Aprilia is offering 4 different race-spec motorcycles including the one based on its MotoGP programme. All four versions are based around the already bonkers Aprilia RSV4 RR Race Pack, but add a number of go-faster bits. The range starts with an RSV4 optimised for the track, followed by the SSTK2  - identical to the 2015 Superstock 1000 FIM Cup motorcycle) and the full-blown SBK version. While all three of these are mighty impressive, it’s the RSV4 R FW-GP that truly stands out from the pack.

For starters, it’s built around the RSV4 R FW SBK, albeit featuring some significant mechanical revisions. The V4 engine is derived from the RS-GP 15 racing motorcycle. It’s an increased bore of 81mm as opposed to 78mm in other versions. Plus, the engine gets pneumatic valves in its running. “It’s a configuration similar to the one that Aprilia raced officially in the 2015 MotoGP world championship”, says the company. As per Aprilia, these tweaks “guarantee maximum power of more than 250 horsepower”!

Aprilia hasn’t revealed the prices of the RSV4 R FW GP, but it’s going to be a bit too, erm, expensive. If you’ve pockets deep enough to buy one, Aprilia will also ensure that you get some special treatment. You will be invited to the Aprilia Racing headquarters in Noale to select the ideal configuration for your motorcycle, in the company of Aprilia’s engineers. The customers will also get Aprilia Racing branded full track leathers along with a paddock pass for an entire MotoGP race weekend. More importantly, the owners will be invited to participate in an Aprilia track day, where Aprilia Racing engineers will help you set up your GP machine based on your needs, riding style and requirements. Further, you can call an Aprilia Racing engineer every time you go for a track day. So, overall, it doesn’t sound like a bad deal at all - if you've the means and money to buy one, that is.